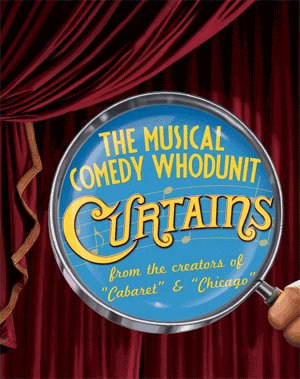 Curtains is a second-tier offering from Kander & Ebb, the creators of such modern classics as Cabaret and Chicago. Before it was completed, both its original librettist (Peter Stone) and lyricist (Fred Ebb) died. Rupert Holmes was hired to rewrite the book, and he collaborated with John Kander on many of the songs. It debuted in 2005 in Los Angeles, and opened on Broadway in 2007 to commercial, if not critical, success. Nominated for eight Tony Awards, its star and box office draw, David Hyde Pierce, was the only winner.

Set as a murder mystery in Boston in the late ‘50s, this musical within a musical is an amusing send up and romp through a series of behind the scenes shenanigans. The story is convoluted, but suffice it to say an entire company is suspect in the killing of its untalented lead actress and Lieutenant Frank Cioffi (Rob Christopher), a theatre aficionado, is brought into to figure it all out. Ultimately, he unveils not only the perpetrator, but a set of schemes designed to affect the show’s aspirations to move on to New York City. Oh, and he manages to solve its several production problems, too!

This is a quintessential example of community theatre. Despite an opening night beset with some serious miscues, severe audio and lighting problems, and a small orchestra with a horn section that unfortunately hit too many bad notes to ignore, the unbridled enthusiasm of its players remained undaunted. And as well it should, because it’s evident early on that a lot of serious effort and talent have gone into its presentation.

The frequent set changes are seamless, and the colorful scenic and art design (Glynis Crabb, Beth Dewey and Robin Harris) and myriad costumes (Carol Harris) are lovingly rendered. The choreography of Mitzie Imigaya is uniformly good, with a rousing closing number to the first act, “Georgia Can’t Dance,” a dreamlike ballroom sequence, “Tough Act to Follow,” featuring some elegant dancing by Mary Beth Anderson and Mr. Christopher, and the spectacular final version of “In the Same Boat,” among her many notable achievements.

This is a large cast, and director Carol Harris’ expert and elaborate staging utilizes the relatively small space for optimal effect. Her ingenious use of props throughout, including handheld flashlights in the ensemble piece “He Did it,” exemplifies her unusual vision and creativity.

As to be expected, the vocal and acting acumen of the performers is decidedly uneven and seldom great. But I’m happy to report the casting is actually first-rate. As the lead, Mr. Christopher is convincing as the amiable police detective whose infatuation with the performing arts – and Niki Harris (Ms. Anderson), one of many suspects – may serve to compromise his investigation. And he’s aided immeasurably by the able support of the versatile Ms. Anderson with whom he often shares center stage.

Roberta Vinkhuyzen Rasmussen displays her superior vibrato and acting chops as lyricist Georgia Hendricks, whose separation from her songwriting partner and ex-husband Aaron Fox (Leslie Lamcke) provides the backdrop for the beautiful duet “Thinking of Him.” And Mr. Fox’ fine solo rendition of the memorably melodic ballad “I Miss the Music” is genuinely affecting.

Among the standouts is the redoubtable Julie Masterson as the tough as nails producer Carmen Bernstein, whose dynamic personality belies her diminutive stature and is a wonder to behold. And Chris Souza is nothing less than hilarious as the flamboyant, cat-loving director Christopher Belling. Both recite their funny one-liners with an uncanny abandon and poise.

But the real scene-stealer is Megan Griffin, who as Bambi (aka Elaine) inhabits the dumb blonde archetype with such utter commitment and joy that she just about lights up the stage. Her razor-edge comic timing, magnetic charm and boundless energy are perfectly suited for her role. And her natural physicality and grace is readily apparent during the marvelous “Kansasland” sequence. Bravo!

Keep your expectations in check and take a trip to Morgan Hill to partake of one of the South Bay’s best entertainment values!