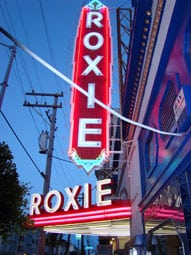 The legendary Roxie Theatre, the famed film house located in the Heart of the Mission in San Francisco, announced it will soon offer live theatre.

In addition, The Roxie will be launching “Roxie Stages.” This project has been developed by Roxie Board member Kate Statton and will give the Roxie’s weekend patrons a one-of-a-kind experience, introducing a roster of entertainers who will grace the Roxie stage a half hour before the evening feature. The inspiration is to bring back dazzling, funky, and unforgettable performances, reviving the Roxie’s original function as a venue for Vaudeville-esque variety shows, a place where live entertainment and films are regularly presented in concert.

Roxie Stages is also part of the theater’s mission to become a center for San Francisco’s artistic community. The project will give local performers the opportunity to display their talent before a live audience. We have already begun reaching out to San Francisco schools and community centers to present the initiative to local entertainers. These specially selected individuals will have the opportunity to be a part of the thriving artistic community of the Mission District, joining the Roxie’s intention to become a viable space for a diverse body of artistic expression. Auditions will begin April 23.

The Roxie’s inaugural Board of Directors currently consists of 13 members, including curator, writer, and occasional preservationist Steve Seid, who has been at the Pacific Film Archive (PFA) for the past two decades and Susannah Robbins, the Executive Director of the San Francisco Film Commission.