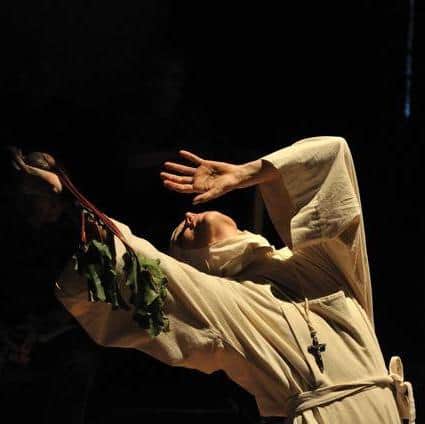 Galileo Galilei, sixteenth century astronomer and mathematician, known as the father of modern science, was also a devout Roman Catholic. Among his more radical notions was heliocentricism, which suggested that the sun, not the earth, was the center of the known universe. This was in direct contravention to Biblical scripture and would inevitably lead to his being tried for heresy.

Despite his religious piety, he had three children out of wedlock, two of which are featured in this play. Even during the enlightened Italian Renaissance, women born illegitimate had little prospect for marriage, so as they entered adolescence Galileo decided to send his two daughters to a nearby convent. For better or worse, they would remain there until they died.

Playwright Giulio Cesare Perrone, the artistic director of the recently formed Inferno Theatre Company, has created an original work for their inaugural production. The expansive theatricality of Galileo’s Daughters flirts with the experimental, utilizing such devices as dance movement and visual symbolism, without ever breaking the fourth wall. As such, the experience is not typically mainstream and may be heavy going for the uninitiated.

The play examines how the pursuit of one’s passion in a hostile environment, whether it’s scientific inquiry or a cloistered life, can come at a high cost. Perhaps more importantly, it reminds one of the power of unconditional love to overcome adversity.

Michael McCamish, as Galileo, strikes an imposing figure on stage. The lanky, baritone voiced performer eschews naturalism in favor a stilted, expressionistic style of acting. Taken on its own terms, his characterization does effectively convey the anguish of a man who is unable to reconcile how his quest for scientific truth can be considered religious infidelity. His portrayal comes to full bloom as he captures Galileo’s awe and excitement while demonstrating one of his many fascinating discoveries.

As Livina and Virginia share their lives in a Florentine monastery, they each approach their faith in a way that illustrates their disparate personalities. While the former’s more visceral nature struggles with the demands of an ascetic existence, her sister uses her keen intellect to cope and guide their way. And the broad-brushed performances of Simone Bloch (Livina) and Valentina Emeri (Virginia) reflect that dichotomy.

Befitting her more emotionally sensitive and complex middle child character, Ms. Bloch affects a manic intensity that at times borders on mental illness. Ms. Emeri brings a maturity and intelligence that suits her part as the quintessential elder sibling who’s most like their father. And they both have fun with the pomp and circumstance required of their dual roles as members of the church hierarchy – adorning splendid garments designed by Anne Victoria Banks Perrone.

Overall, this mildly avant-garde one-act is probably an acquired taste that must be experienced firsthand to be fully appreciated. The Tabard Theatre Company in San Jose should be commended for providing a venue to a dramatic new voice in Bay Area theatre!