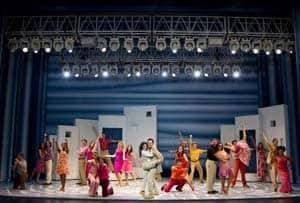 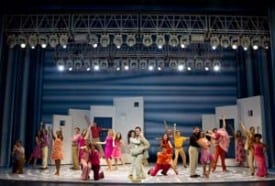 Benny Andersson and Björn Ulvaeus’ Mamma Mia!, the smash hit musical based on the songs of ABBA rounds out Broadway San Jose’s 2010-2011 season.

An independent, single mother who owns a small hotel on an idyllic Greek island, Donna is about to let go of Sophie, the spirited daughter she’s raised alone. For Sophie’s wedding, Donna has invited her two lifelong best girlfriends—practical and no-nonsense Rosie and wealthy, multi-divorcee Tanya – from her one-time backing band, Donna and the Dynamos. But Sophie has secretly invited three guests of her own.

On a quest to find the identity of her father to walk her down the aisle, she brings back three men from Donna’s past to the Mediterranean paradise they visited 20 years earlier. Over 24 chaotic, magical hours, new love will bloom and old romances will be rekindled on this lush island full of possibilities.

Inspired by the storytelling magic of ABBA’s songs from “Dancing Queen” and “S.O.S.” to “Money, Money, Money” and “Take a Chance on Me,” Mamma Mia! is a celebration of mothers and daughters, old friends and new family found.

Seen by over 45 million people around the world, Benny Andersson and Björn Ulvaeus’ global smash hit musical Mamma Mia! is celebrating over 3,800 performances in its tenth smash hit year at Broadway’s Winter Garden Theatre and remains among Broadway’s top selling musicals. The current North American Tour has played over 3,000 performances in over 130 cities with 125 repeat visits. The original West End production of production is now in its twelfth year and has celebrated over 4,800 performances in London and the international tour has visited more than 50 foreign cities and been seen by 3.6 million people. The blockbuster feature film adaptation of Mamma Mia!, produced by Judy Craymer and Gary Goetzman, is the most successful movie musical of all time grossing $600 million worldwide.

Produced by Judy Craymer, Richard East and Björn Ulvaeus for Littlestar in association with Universal, the creative team responsible for bringing Mamma Mia! to theatrical life includes some of the most gifted and celebrated talents of musical theatre and opera. With music and lyrics by Benny Andersson and Björn Ulvaeus, Mamma Mia! is written by Catherine Johnson and directed by Phyllida Lloyd. Choreography is by Anthony Van Laast, production design by Mark Thompson, lighting design by Howard Harrison, sound design by Andrew Bruce and Bobby Aitken, and musical supervision, additional material and arrangements by Martin Koch.