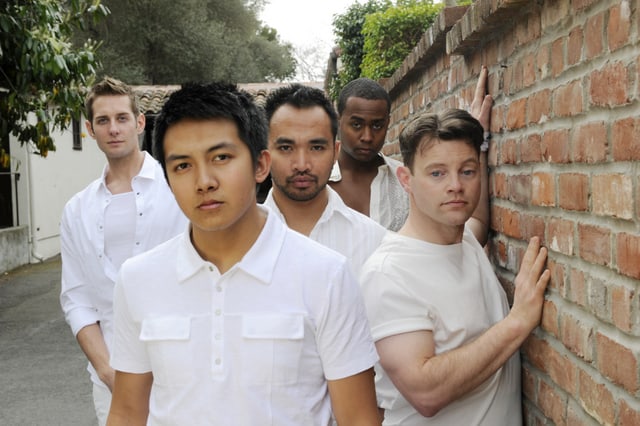 Satire is arguably the most difficult genre to accomplish in the performing arts. The humor can be lost in the wink of an eye if the wrong chord is struck. The miracle of Altar Boyz‘ success, taking aim at the Christian boys band phenomenon, is that it somehow works as a devilishly clever send up of that which many already consider a parody. One can’t fathom anyone being offended, unless one considers the crass commercialization of religion a sacred cow!

Convincingly staged as the final concert of their “Raise the Praise” tour, the one act show is in essence a musical revue with a non-stop series of song and dance numbers set to a common theme. Impeccable lighting design (Ed Hunter), and musical direction (Matthew Mattei), contribute immeasurably to the overall feeling of authenticity. Recognition must also go to Danny Martin playing both the announcer and the voice of God!

The mandatory running gag employs the use of a device called the “soul-sensor DX-12”, supplied by the “good people at Sony”, that purports to measure the number of devoted “fans” in attendance who need to be purified of their sins. They won’t quit until it reaches zero, and early on one suspects that goal will prove to be something of a challenge. Ironically, one can’t help but glance at the LED display to see if the count declines after every soul-cleansing “ritual”!

The dynamic quintet are Matthew (David Saber), the leader; Mark (Jordan Pajarillo), the sensitive one; Luke (Brian Palac), the bad boy; Juan (Ashley Simms), the Latin lover; and Abraham (Daniel J. Harper), the gefilte fish out of water! Their boundless energy and enthusiasm is infectious, and with holy names like that they have no choice but to be good and inspirational! And the amusing banter between tunes provides them with an interesting back-story and helps define their characters.

Undoubtedly cast for more than his wholesome good looks, Saber is just about pitch-perfect, both vocally and in his earnest portrayal. His dulcet-toned delivery of the tongue-in-cheek ballad “Something about you (makes me want to wait),” sung to a young theatergoer taken from the audience, is among the many highlights. His slick execution of the requisite synchronized moves is at a par with the rest of the uniformly talented ensemble.

Palac, donning a “gangsta cap” cocked to the side, brings just the right attitude as the homeboy with a heart of gold – who’s been hospitalized for “exhaustion”. He’s given an opportunity to showcase his hip-hop skills with one of the many outstanding dance routines by director and choreographer Jeanne Batacan-Harper. And he belts-out a strong, soulful performance of “Mind, Body and Soul” that just about brings the house down!

Simms is an accomplished tenor, but it’s his impressive comedic abilities that are at the forefront of his time on stage. Juan suffers an emotional breakdown in the middle of his solo upon receiving news of the loss of his parents, forcing his cohorts to stand in woefully unprepared. But, with the support of his friends, he finds the inner fortitude to carry on and proceeds to sing his heart out. Simms, affecting a Hispanic accent, handles the melodrama with a deft comic aplomb! 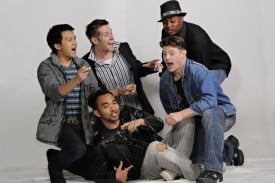 As the only Jew in an evangelical band, it’s an understatement that Harper’s character doesn’t quite fit in. Of course, that’s the point, and it does help convey writer Kevin Del Aguila’s ultimate message of acceptance and strength through diversity. It’s Abraham’s integrity and loyalty to the group that keeps them together, and Harper does justice to the play’s most heartfelt and resonant scene.

Fresh off the heels of his scene-stealing turn in the recent Sunnyvale Community Players production of Sweeney Todd, Jordan Pajarilla shines once again, exhibiting the kind of talent and versatility of a star on the rise. Mark harbors a secret crush for Matthew that’s painfully obvious to everyone except his fellow band members. Instead of overplaying the part, Pajarilla relies upon his prodigious instincts as a performer to find the right balance between subtlety and annoying caricature. And he reveals a remarkable vocal range and control with his virtuoso rendition of the subversively funny “Epiphany.” It’s a genuine show-stopper! Bravo!

The Palo Alto Players’ 80-year tradition of bringing exceptional theatre to the South Bay has never been more entertaining. Make it your mission to plan your next pilgrimage to the Lucie Stern Theatre as soon as your calendar allows!