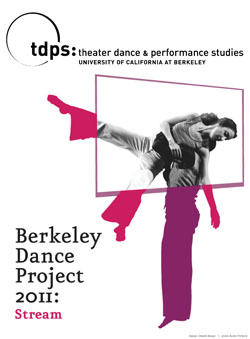 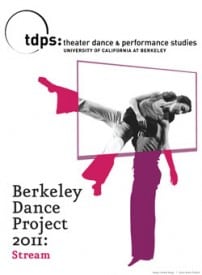 UC Berkeley’s Department of Theater, Dance, and Performance Studies (TDPS) concludes its 2009-10 Main Stage season with Berkeley Dance Project 2011: Stream, featuring dances that incorporate, use and are informed by new technology. As a theme and a mission for the department, the production (under Dance program head Lisa Wymore’s guiding hand) is set to reveal ways of looking at technology as an integral part in the presentation of the art of dance.

Lisa Wymore and Townsend Resident Fellow Ellen Bromberg collaborate on a new work entitled The Somnambulist’s Dream that draws on imagery related that space that between wakefulness and sleep, filled with minute details and larger than life distortions. In this piece, the choreographers have set a dance across multiple technological forms: live dance, live video and prerecorded video.

“We’re working to layer the live and recorded parts of the piece so that the two will extend and inform each other,” says Bromberg. “The goal is to create a piece in which the dance, the prerecorded video and the live video projection create a seamless reality”

Wymore agrees. “What’s great about the piece is that it revolves around a dream-state – dreams, nightmares, daydreams… these things work very well with the integration of video and dance. You’ll perceive time speeding up and slowing down, space expanding and becoming unfamiliar, and sounds becoming acutely distinct and then fading into the unknown.”

Ryan Smith is creating the original sound composition, which acts as a rich sonic layer through which the piece expands and
contracts.

Choreographer Peggy Hackney will premiere a new multimedia work incorporating video, photography and scores of water bottles into a piece about the poetry and politics of water.

“We look at water, and think it’s a natural resource everywhere – an elixir of life that belongs to everyone,” says Hackney, “yet the global corporate privatization of this natural resource makes it a life and death issue. Whether in African deserts, Haiti or Japan, the people who can pay for water will survive…others will not. Plastic water bottles are sold by these corporations as the only safe drinking water, yet our planet is drowning in non-biodegradable plastic. The desertification of our land as well as the devastation caused by chemical pollution of ground water, oil spills, or disasters such as tsunamis all bring up water as one of the most pressing ones of our time.”

To create the piece collaboratively with her students, Hackney had the class visit streams, as well as research distribution, scarcity, and privatization of water. Photography is provided by Jamie McHugh and video by Sheldon Smith. Music composition is by Ben Juodvalkis, and costumes by Christine Crook.

TDPS graduate student Hentyle Yapp explores the dynamics of human relationships and emotions as they have been changed through technology and accelerated rates of communication in his work, The MacGuffin. The piece centers around a series of awkward human interactions online, on stage, and between performers. This collaborative work between Yapp and his students intermixes set physical and theatrical movement with improvisation. For Yapp, who danced professionally with companies in Taipei and New York before coming to school in Berkeley, that collaboration has been key to the process: “They really wanted to dance, with speed and energy; that strong movement aesthetic has really informed the piece.”