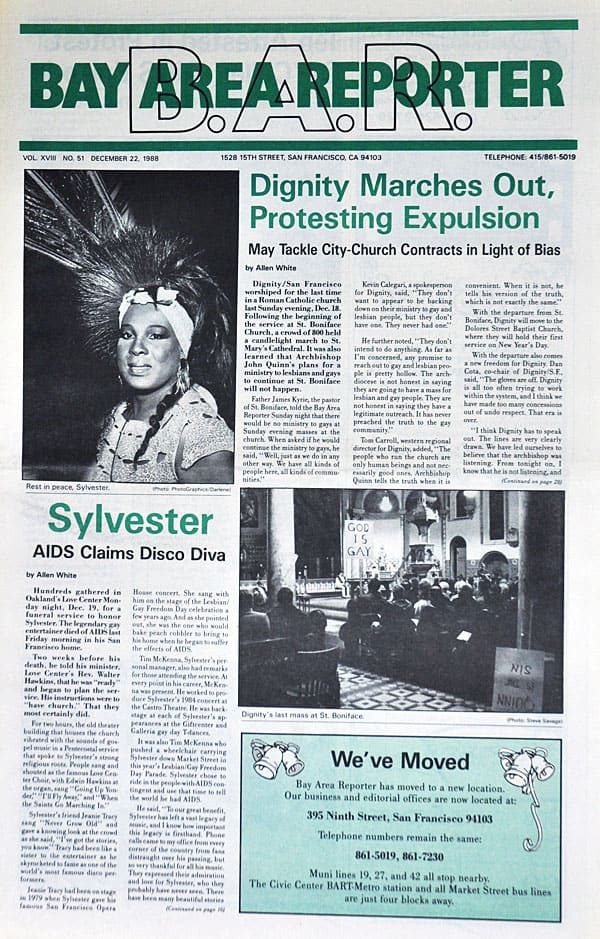 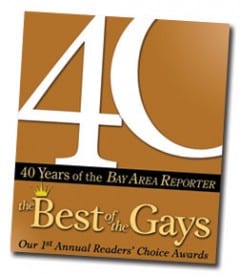 In conjunction with the 40th anniversary, the newspaper is launching its first-ever Best of the Gays Readers Choice Awards. Readers vote online with their write-in favorites (one vote per e-mail) and are eligible for prizes including trips to Boston Reno, Seattle and Los Angeles, SF Giants tickets and more. The winners will be announced in the 4/7/11 issue. Categories include: Food, Arts & Nightlife, Outdoors & Sports, Shopping, City Living and of course, Sex & Romance.

Along with the 40th anniversary, the newly-opened GLBT History Museum in the Castro will have on display a special B.A.R. historical exhibit from April 8 -13, 2011.

The Bay Area Reporter, founded in April 1971 by the late Bob Ross and Paul Bentley, is a San Francisco institution and has covered such historical landmark LGBT events from Harvey Milk’s assassination in 1978 to the closure of the gay bathhouses in the 1980s to same-sex marriages being celebrated in the state to the election of gay politicians. Countless stories of the LGBT Bay Area residents have been featured in its pages over the years. A separate Arts and Entertainment section boasts countless celebrated writers in their fields, and the paper has been proud of its rich arts coverage of the San Francisco’s Ballet, Symphony, and Opera along with emerging and established talent in the gay arts scene. The B.A.R. has also covered the AIDS epidemic from its beginnings in June 1981; this year marks the 30th anniversary of the disease.

“The Bay Area Reporter has seen amazing changes in its 40 years of publication,” said current publisher Thomas E. Horn. “Beginning little more than a ‘bar rag,’ the B.A.R. has become the most respected and longest, continuously published LGBT newspaper in America.”

The first issue of the B.A.R. – initials that acknowledged gay culture as well as the initials of Ross and original business partner Bentley – hit the streets on April 2, 1971, Ross’s 37th birthday. Ross pasted-up all the pages by hand, copied them, and delivered them to local bars from his 1969 Ford Mustang. Within a few years, the B.A.R. became known as the insider gay news source about town, and later, as one of the most respected LGBT voices in journalism nationwide. Bentley left the paper after a few years. Ross died in December 2003 of complications from diabetes at the age of 69. Horn assumed publication of the paper after Ross’s death. Through the years, the paper’s mix of humor, analysis, community input, and political advocacy – combined with solid reporting – tapped into local sentiment and helped to set the tone for the LGBT movement worldwide. The paper was published biweekly for the first several years and became a weekly publication in the fall of 1981.

“Forty is an age of maturity and a good time for reflection,” said former state Senator Carole Migden. “The LGBT community has advanced over the years but the B.A.R. was there before, a harbinger if change and courage which helped us plot the paths.”

Among its columnists, perhaps none is more famous than Harvey Milk, who went on to be elected the first openly gay supervisor but tragically, was murdered in City Hall along with then-Mayor George Moscone in November 1978. Wayne Friday, a longtime city resident and former investigator with the district attorney’s office and a former member of the Police Commission, served as political editor for many years. His columns were well known for their boldface names, and politicians would pick up the paper every week to see if they were mentioned. Friday retired his column in 2005.

The B.A.R. has also kept up with the changes in the media. In 2005 it launched its website, www.ebar.com, and in spring 2010 it launched BARtab, a monthly entertainment and nightlife magazine.

“The B.A.R. has never rested on the laurels of being an award-winning publication, but has continuously tried to be on the cutting edge of the industry as is evidenced by our world wide read website, and, most recently, the launching of San Francisco’s premier night time guide, BARtab,” Horn said. “We pledge to you, our readers, and to our loyal advertisers, to maintain the depth and quality of our reporting on issues that you care about. We will not let you down.” 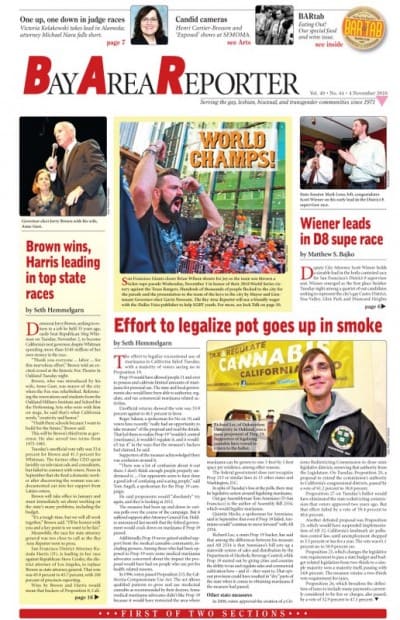