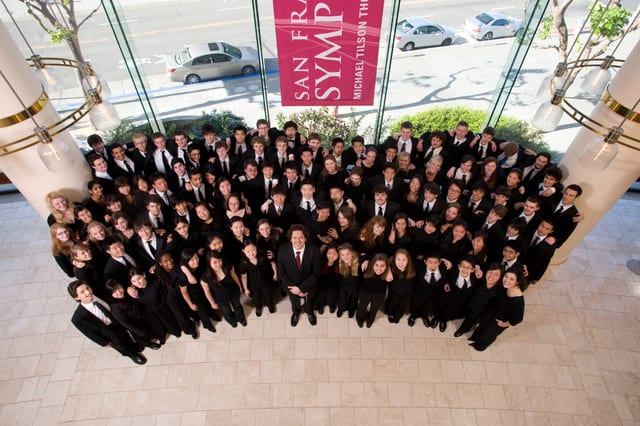 Wattis Foundation Music Director Donato Cabrera leads the ensemble in a program that explores both the classical and 20th century orchestral repertoire, including Honegger’s Pacific 231, Haydn’s Symphony No. 84 in E-flat major, Webern’s Im Sommerwind, and Britten’s The Young Person’s Guide to the Orchestra.

Founded in 1981, the San Francisco Symphony Youth Orchestra (SFSYO) is recognized throughout the United States, Europe and Asia as one of the finest youth orchestras in the world. SFSYO’s purpose is to provide a tuition-free orchestral experience of preprofessional caliber to young musicians from the greater Bay Area.

The SFSYO rehearses and performs in Davies Symphony Hall under the direction of Wattis Foundation Music Director Donato Cabrera. In addition to working with San Francisco Symphony musicians in sectional coachings each week, SFSYO members have the opportunity to meet and work with SF Symphony Music Director Michael Tilson Thomas and many of the world-class artists that appear with the San Francisco Symphony each season.

In 2002, Cabrera was a Herbert von Karajan conducting fellow at the Salzburg Festival. From 2005 to 2008, he was Associate Conductor of San Francisco Opera, participating in the world premiere of John Adams’s Doctor Atomic and conducting performances of Die Fledermaus, Don Giovanni, Tannhäuser, and The Magic Flute. He has also served as Assistant Conductor at the Ravinia, Spoleto, and Aspen Music Festivals, and as Resident Conductor at the Music Academy of the West.

TICKETS: $45 reserved/$12 general. Tickets are available at www, by phone at 415-864-6000, and
at Davies Symphony Hall Box Office, on Grove Street between Van Ness Avenue and Franklin Street in San
Francisco.