Teatro ZinZanni has introduced Cabaret Lunatique, a series of nine late-night cabarets each focusing on a distinctive San Francisco neighborhood. Beginning March 19 with “Celebrate Chinatown,” the zany performances will showcase many local artists in a late night varieté spiced with saucy cabaret, crazed circus, scandal, music and mayhem – all held in the gorgeous, glamorous Spiegeltent on Pier 29.

First launched in 2008, Teatro ZinZanni’s cabarets all sold out and are now back by popular demand. Eight additional evenings are scheduled for the remainder of the year focusing on the neighborhoods of North Beach, Mission, Castro, Fillmore/Jazz, Haight Ashbury, SOMA, On the Waterfront and The Hills.

“We know that there is an audience in the Bay Area that is looking for exciting and unique entertainment late at night – because we search for the same thing when we head out into the night after our regular show…” said Teatro ZinZanni Managing Director Patrick Markle.  “We thought – why not invite them in to a series of cabarets focused on the huge wealth and diversity of talent…right here in town. Voila – Cabaret Lunatique is born.”

Cabaret Lunatique debuts March 19 with “Celebrate Chinatown.” Doors to the lobby will open at 11:15 PM. Admission is $35 for premium and $25 general admission. (pictured right: Calvin Kai)

An esteemed member of the local arts community for more than a decade, Teatro ZinZanni is a not-for-profit arts organization with a mission to preserve, nurture, and support the centuries-old traditions of European circus arts. Over the past decade, Teatro ZinZanni has assisted other non-profit organizations including Sean Penn’s Haitian Relief Organization, Bread and Roses Family Foundation, Huckleberry House, Suicide Prevention League and New Leaf Services in raising more than $2,000,000 for charitable causes through ticket donations and hosting fundraisers in the tent. 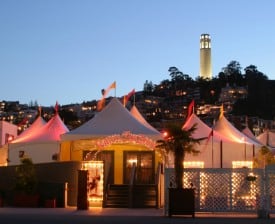 Libations: Drinks and light food will be available at an additional cost.

Tickets: Admission is $35 for premium, $30 for preferred and $25 general admission.