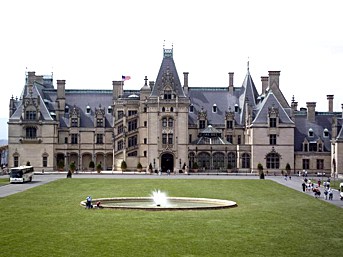 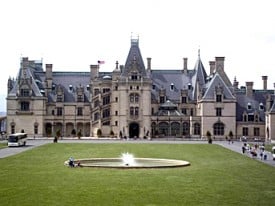 So there I was, sitting at the Biltmore’s premium wine bar, sipping a flute of their divine bubbly; the Biltmore Methode Champenoise Blanc de Blanc had just been awarded Best of Class at the prestigious 2011 S.F. Chronicle Wine Competition. I was furiously scribbling down all the decorating ideas that caught my eye while touring America’s largest home. I admit that possibly the 16th century Flemish tapestries, the priceless portraits by Renoir, the gaming table once owned by Napoleon, the 10,000 books lining the library, and the zillion antiques scattered throughout the 250 room castle, might be just a tad over the top for my one bedroom flat in San Francisco, when I overhear my neighbor say to the Bartender, “And the LADY would like…”

I lean over and say to the good-looking Southern gentleman, “It so nice to hear someone order for the “lady”.

The “lady” promptly whacks him on the shoulder and says in a darling Irish lilt, “See, I told you that was the proper way to order for me,” as she gazed lovingly into his eyes.

I went back to my sparkling wine and perusing my Biltmore press kit. Turning the page, I came to the history of the mansion and began reading the fairytale, love-story of how Edith Stuyvesant Dresser (who sadly had been orphaned at the age of 10) met George Vanderbilt (one of America’s wealthiest and most eligible bachelors) on a trans-Atlantic trip to Europe. They fell madly in love and soon married. George began work on his dream house and a few years later they were happily ensconced in the 8,000-acre Biltmore estate, where they spent many years in wedded bliss. Nice wedding present!
As I got to the end and let out a small sigh, I caught the eye of the Southern gentleman.

He cleared his throat and said, “Do you want to know how I ended up with this lovely Irish lass? It’s quite an interesting story.”

He introduced himself as Ken from Greensboro and Jennifer was his feisty Irish lady-friend. Then he whipped out his cell phone to show me this picture and began his tale.

“When I was a junior in high school, Jennifer came here as a transfer student from Ireland and stayed with a local family. We soon were totally inseparable and it broke my heart when she had to go back home. She returned for a visit a few months later and we grew even closer, but we were too young for anything permanent. She went back to Ireland and we had no contact for the next 48 years.”

(In the interim, they had married other people and both had grown children but were now single.)

“A few months ago,” Ken continued, “I heard that the mother of the family she had lived with here, had died. I thought Jennifer would want to know, but all I had was an old address for her, no email or anything. I wrote her a letter and sent it off. Unbelievably, it somehow reached her and we began corresponding (by old-fashioned letter writing since Jennifer doesn’t use computers.) I started feeling the same old attraction and said to Jennifer,”I think we should meet and see if this is for real.”

One of her children was living in New York so we decided to meet there. The day before we were to meet, I screwed up my nerve and asked her, “When we meet do we shake hands or kiss?”

At which point Jennifer interrupted and laughingly said, “I picked kiss, of course.”

Ken smiled and said, “Well, from the moment I saw her it was like no time at all had passed. The feelings came rushing back for both of us and now she’s visiting me here for a month to see how she likes it.”

I interrupted and said,” I’m really late and have to run. I don’t mean to be too nosy but…what are your plans? Marriage, living in sin, traveling back and forth forever, or?”

Simultaneously, Ken responded in a firm tone, “I definitely want to get married” as Jennifer said a little wickedly, “I’m more than happy to live in sin.”

I gave them my card so they would know where to send my wedding invite and left them holding hands and reminiscing.  It’s nice to know that old fashioned romance is still alive and well.

P.S. Small hint: The Biltmore would make a magical setting for the wedding.

For more details about planning your wedding at The Biltmore House see their website.