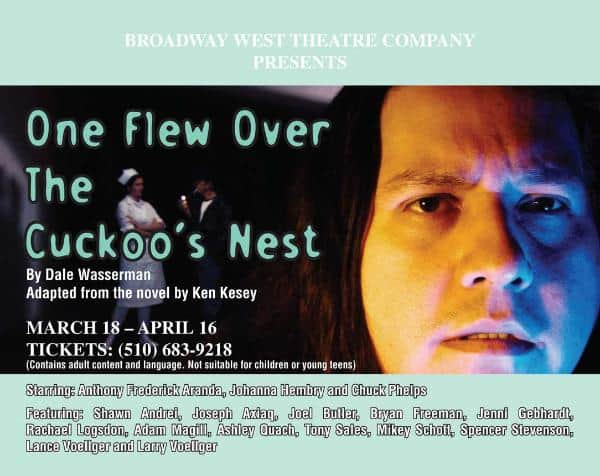 One Flew Over the Cuckoo's Nest

“Cuckoo’s Nest” is an important artifact of the American countercultural landscape that came into fruition in the 1960s. It successfully operates as allegory deeply rooted in the period. And yet, its theme of the dangers of social and political oppression still resonate a half-century later. But at its core is a wonderful, timeless and universal story about the indomitability of the human spirit.

What this company lacks in resources it more than makes up for in an abundance of talent and ambition. The creative design elements of the shocking opening scene augur well for what is yet to come. The set, lighting and sound design are realized to maximum effect throughout the entire production. Director John Rutski must be given credit for refusing to allow a limited budget to compromise his vision.

The story unfolds from the perspective of a gentle giant, Chief Bromden, a Native American patient at a mental health facility. He sees the world as controlled by an authoritarian force he calls “the combine”. His hallucinatory narration is key to understanding the story as it links each scene transition in a surreal, psychedelic haze.

As if reciting poetry, Anthony Frederick Aranda somehow conveys the delirious paranoia of the words without abandoning their heartfelt meaning. He captures the unassuming nobility of his character with an appealing, shy manner and authentic vocal rhythm. He’s totally convincing, and his uncanny serenity is pervasive on stage!

Randal P. McMurphy is the free-spirited protagonist who feigns mental illness to side step a prison sentence. He enters a hospital inhabited by a menacing staff and quirky assortment of troubled patients. Despite his duplicity, the sheer force of his personality serves to inspire his fellow inmates to overcome their fear of the powers that be. Chuck Phelps succeeds in bringing a rebel charm and streetwise edge to the role, but he lacks the gravitas necessary to make his portrayal as a leader wholly believable.

Of the principal players, Johanna Hembry gives the most risky and daring performance. As perceived by Bromden, Nurse Ratched is not a real person as much as she’s a supernatural personification of the “machine.” As such, she must possess an intimidating presence sufficient to stifle the will and gain control.

Happily, Miss Hembry’s gamble pays off, and she delivers a deliciously wicked piece of acting. She adopts an eerily calm cadence to her speech along with deliberate facial and body movements that are almost ghoulish. Her detached malevolence is truly creepy and portends a sinister agenda. I hasten to add that she’s aided by a very clever lighting technique!

The remaining cast members are uniformly fine, each inhabiting their roles with the type of exuberance that does justice to the concept of “supporting” characters. Their commitment is exemplified best by a deftly handled “party” scene executed with great alacrity by all concerned. Honorable mention must be given to Adam Magill’s sensitive portrayal of the youthful and naïve Billy Bibbit, and the delightful Larry Voellger who, as Dale Harding, steals virtually every scene!

One would be remiss without noting that the play does take some time gaining momentum after the stirring initial scene. And the climatic encounter between McMurphy and Ratched is not handled with the type of virtuosity as that which precedes it. Those misgivings aside, the overall effect is quite entertaining and satisfying.

The dedication on display in smaller, local venues such as this one must not go unrewarded. It’s certainly worth a trip to the cozy ambiance of the Broadway West Theatre in Fremont!

One Flew Over The Cuckoo’s Nest

Broadway West Theatre, Fremont
3.5 out of 5 stars
By Dale Wasserman
Adapted from the novel by Ken Kesey
Through Aprill 16, 2011