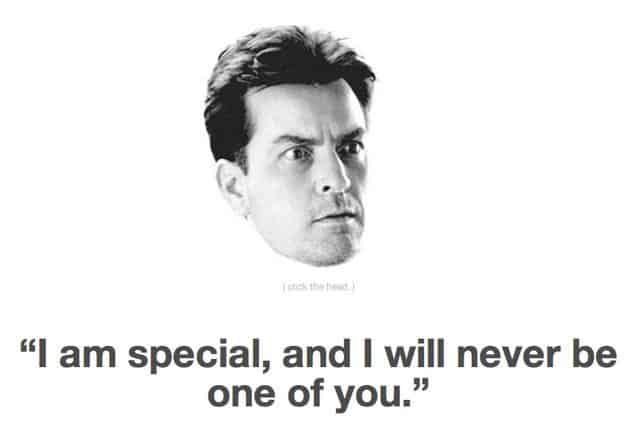 Ed – Friend of Stark Insider, Tom Eden, is a pseudonym used by someone with L.A. groove and maybe even a connection or two. My thanks to Tom for writing for us over the years. In return I grant this one — one! — #winning story. Also, don’t forget we have a call for writers (contact us). Just don’t dare send me another Sheener. – Clint 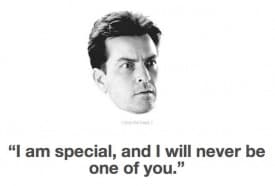 Up until “Sheen’s Korner” even I’ll admit I was taken by the never-ending array of (actually clever) witticisms, memes and catch lines that is Circus Charlie Sheen. Hollywood is quite forgiving. Kind of like the NFL and the Mike Vick story, there’s a certain tolerance for, uh… oh yes, making money! Plus the American public likes a good comeback story. We cheer them to the highest highs. Boo them down. Then guilt sets in — wait, that could be me?! — and we proceed to rally behind them for a comeback.

But, sorry Mae West, there is such a thing as too much.

With his latest F-18-inspired media whipping, a 45-minute nonsensical, poorly executed (not surprising that), and ill-conceived “show” on UStream committed a cardinal sin: it pushed Sheen’s into the land of over-exposure. It was a not-so-magical-hour that featured Charlie Sheen and the Island of Misfit Toys.

Sure, you could say he already was over-exposed. Hard to argue with that.

However, with UStream, and the earlier interview with TMZ, Sheen did massive, perhaps irrevocable damage, to his brand. By showing himself as too accessible, too normal he made himself less like an Adonis, and more like the everyman. Lighting and presentation do matter.

This in itself contradicts Sheen-ism #432: “I am special, and I will never be one of you.”

In fact, you’re just like the millions of us that limp to the home office, crack open a beer, and flip on the webcam to broadcast live a steady stream of domestic melodrama and impromptu boredom. Every now and then on “Sheen’s Korner” we got a glimpse of the talent that the born-again-web-2.0 entrepreneur has surrounded himself with. And let’s just say it makes Team Lindsay Lohan look like the 2010 L.A. Lakers.

Up until this weekend, most of what Sheen has done is mostly forgivable. It’s simple. He lays golden eggs. Studios like that. Okay, so he’s “slightly” volatile. Hundreds of millions of dollars (maybe billions with syndication factored in) has a way of soothing nerves. (I won’t address domestic abuse here. I think that crosses the line obviously and could ultimately be the crushing blow with the American public).

It’s impossible to predict what was going through his mind when he decided to stream a live show. I can guarantee the publicist-free star wasn’t surrounded by the best “advisors.”

Suffice to say, it probably included a dollop of tiger blood and better planning: Screw the studios. I’ll go direct!

Some might even call it disintermediation- that great Web 2.0 equalizer.

He’s effectively figured out a way to also not make money. Just like the rest of us. Welcome to the world of the common people. In less than two and a half months, Sheen has gone from the highest paid TV star to a drug-addicted partier to an inspirational Twitter motivator to an over-exposed joke (see: SNL). It’s as if he feels the need to keep one-upping himself. This can’t end well.

So instead of retreating and letting mystique blossom… he hit the airwaves again- in a very poor, unprofessional context. With the fedora, he even had a sad aura of a Kevin Pollack wannabe (whose online show is superb).

Streaming on the web, babbling incessantly and running out of material…

With that, Fastball Charlie broke one of the golden rules of show biz: always leave them wanting more.