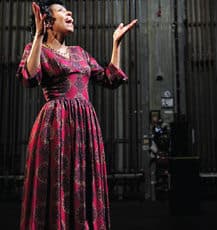 Berkeley’s acclaimed Aurora Theatre Company today announced its 20th anniversary season. According to the company, the line-up pays homage to Aurora’s beginnings at the Berkeley City Club, and to its growth, both artistically and physically, over the past 19 seasons.

“We look upon this juncture in our history as an opportunity for so many of us who have been a part of Aurora from its humble beginnings at the Berkeley City Club, to the opening and recent expansion of our own theater space on Addison Street, to look back and reflect,” said Aurora Theatre Company Artistic Director Tom Ross. “It is also the appropriate time to look forward, not only at the remarkable season we have in store, but to the future as well. This is our version of 20/20 vision, leveraging our perspective from the past 20 years and raising the bar for the next 20.”

The regular season will be staged September 2011 through July 2012 at the intimate Aurora Theatre in the downtown Berkeley arts district.

Tobias and Agnes are a typical long-married couple living in the suburbs. With several bedrooms and a well-stocked liquor cabinet, their home provides a refuge of sorts, and a measure of comfort, to their friends and family. Over the course of two evenings however, the delicate balance of their uneasy existence begins to topple. Agnes alcoholic sister, Claire, has already set up camp, and when their adult daughter comes home after her fourth failed marriage, and lifelong friends Harry and Edna arrive on their doorstep, frightened and seeking sanctuary from an unnamed terror, the many well-mannered and well-masked feelings finally erupt.

A DELICATE BALANCE premiered on Broadway in 1966, with a cast featuring Hume Cronyn as Tobias and Jessica Tandy as Agnes. It won the Pulitzer Prize for Drama in 1967, the first of three Pulitzers Albee received for his work, and received the 1996 Tony Award for Best Revival of a Play. Called gloriousprofoundly touching by The New York Times when David Auburn directed the production in 2010, Variety also declared,  A Delicate Balance still retains its potency after 40 yearsHigh class or low, theres surely a family on every block in which familiarity breeds contempt. A DELICATE BALANCE is a sharp, witty examination on the limits of our responsibility to others, including family and friends, how hard it is to hold everything together, and how easily everything can all fall apart.

THE SOLDIERS TALE
Music by Igor Stravinsky
Book by Charles Ferdinand Ramuz
Directed by Muriel Maffre and Tom Ross
Based on a concept by Muriel Maffre
November 11-December 18, 2011 (Opens: November 17)

Aurora Theatre Company continues its 20th season celebration with an enchanting, one-of-a-kind collaboration between Artistic Director Tom Ross and former San Francisco Ballet principal dancer Muriel Maffre with a re-imagined production of Igor Stravinskys THE SOLDIERS TALE. Workshopped at Aurora in December 2010, this piece to be read, played, and danced will feature four musicians performing Stravinskys visionary score, three actors, a life-size puppet, and Maffre dancing the role of the kings daughter, as well as acting as master puppeteer. Written in 1918, and set to music by Igor Stravinsky (The Rite of Spring), with libretto by Charles Ferdinand Ramuz, THE SOLDIERS TALE is based on a Russian folk tale about a soldier who makes a deal with the devil, trading his fiddle for a book that predicts the future. The narrative is an anti-war Faustian fable, making the piece a highly relevant work for today. In 2006, Maffre performed a concert version with the Orcas Island Chamber Music Festival in Eastsound, WA, where the Seattle Times called the initial performance of the piece both visually and musically mesmerizing, as fresh as new paint and as exciting as a newly minted classic.

Maffre, who retried as a principal dancer from the San Francisco Ballet in 2007, is the recipient of two Isadora Duncan Awards; she will serve as choreographer for THE SOLDIERS TALE and as co-director along with Tom Ross. Jonathan Khuner (Music Director, Berkeley West Edge Opera Company) will provide musical transcription.

Aurora Theatre Company welcomes the New Year with the Bay Area Premiere of Obie Award-winning playwright Annie Bakers comedy BODY AWARENESS, called a smart, modest work about ordinary, flawed people grasping for connectionWhat a beautiful start to her theatrical body of work (Timeout NY) when it premiered Off-Broadway at Atlantic Theater Company in 2008. Its Body Awareness Week on a small Vermont college campus and feminist professor Phyllis and her partner, Joyce, are hosting a guest artist in their home, a male photographer who specializes in female nudes. The couple is already going through a rough patch as they try to counsel their 21-year old son, Jared, an amateur lexicographer with a fondness for the OED and phone sex lines, who they believe suffers from Aspergers Syndrome. When their guest arrives, both his presence and his chosen subject matter instigate a new level of discomfort. Challenging how we see ourselves and thus define ourselves, BODY AWARENESS examines the mutability of relationships and how fragile people become when they are confronted by the unexpected.

BODY AWARENESS will be the fully-staged anchor production in this seasons Global Age Project, an Aurora Theatre Company initiative that encourages playwrights and directors to explore life in the 21st century and beyond. In addition, several new plays dealing with global age concerns will be chosen from an international pool of playwrights and presented in a series of developmental readings during the run of BODY AWARENESS.

Aurora Theatre Company founding Artistic Director Barbara Oliver returns to the company for its 20th anniversary season to direct Arthur Schnitzlers (La Ronde) first theatrical work for the stage, ANATOL. This World Premiere translation, commissioned by Aurora Theatre Company, from renowned Schnitzler expert (and Berkeley resident) Margret Schaefer, features interrelated episodes in the love-obsessed life of a bourgeois Viennese philanderer. A gadabout living for pleasure in late 19th-century Vienna, Anatol practices the arts of seduction, adultery, infidelity, and betrayal, encountering a series of mistresses in his search for the perfect faithful lover. Paradoxically, it is the women in his life who gain the upper hand.

Arthur Schnitzler and Sigmund Freud were contemporaries and fellow admirers. The playwright exhibited an intuitive mastery of behavioral psychology, as evidenced in ANATOL, and in a letter to Schnitzler, Freud said I have often asked myself in wonder where you could have found this or that secret knowledge which I was able to discover only after arduous examination of the object, and ended up feeling envious of the poet for whom I had always had the deepest admiration. According to theater critic John Simon, Schnitzlers work belongs in the vicinity of Proust, Joyce, and Chekov. His work has also been championed and adapted by writers including David Hare and Tom Stoppard, and film makers Stanley Kubrick and Cecil B. DeMille, who helmed a movie version suggested by Schnitzlers ANATOL, entitled The Affairs of Anatol (1921), starring Wallace Reid and Gloria Swanson in her last on screen role under DeMilles direction.

Closing the 20th season is the World Premiere of SALOMANIA, Aurora Theatre Company Artistic Director Tom Rosss first new play commission for the company, written and directed by award-winning Bay Area auteur Mark Jackson (Metamorphosis, Salome, Miss Julie). When Jackson helmed Auroras hit production of Oscar Wildes Salome in 2006, the production was called Riveting…fierce and funny by the San Francisco Chronicle and Elegantly depraved, tastefully decadent, wickedly funny by the Contra Costa Times. This World Premiere, commissioned by Aurora especially for its 20th anniversary season, is a sequel of sorts to Wildes fascinating and sensual play and is based on the extraordinary story of dancer Maud Allan.

A native of San Francisco, Maud Allan took Europe by storm in the early 1900s with her version of the Dance of the Seven Veils, which she called The Vision of Salomé. She became notoriously known as The Salomé Dancer, and was unexpectedly fraught with a lawsuit that destroyed her career. Whereas Salome was Oscar Wildes wild take on the infamous Biblical temptress, her unrequited love of the prophet Jokanaan, and her desperate dance, SALOMANIA uses Allans story as a framework to explore themes of media sensationalism, freedom of expression, and wartime hysteria, themes as relevant today as they were a century ago.

Nominated for 15 Bay Area Theatre Critics Circle Awards for 2010, Aurora Theatre Company continues to offer challenging, literate, intelligent stage works to the Bay Area, each year increasing its reputation for top-notch theater. Located in the heart of the Downtown Berkeley Arts District, Aurora Theatre Company has been called one of the most important regional theaters in the area and a must-see midsize company by the San Francisco Chronicle, while The Wall Street Journal has nothing but praise for the Aurora. The Contra Costa Times stated perfection is probably an unattainable ideal in a medium as fluid as live performance, but the Aurora Theatre comes luminously close, while the San Jose Mercury News affirmed [Aurora Theatre Company] lives up to its reputation as a theater that feeds the mind, and the Oakland Tribune declared its all about choices, and if you value good theater, choose the Aurora.