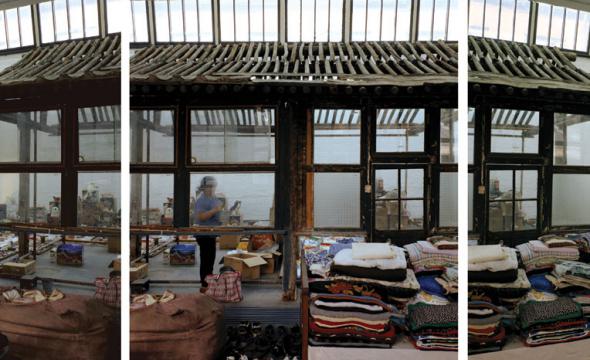 Yerba Buena Center for the Arts announced that they will present a major new exhibition featuring the work of Chinese conceptual artist, Song Dong. The exhibition, Dad and Mom, Don’t Worry About Us, We Are All Well, features the artist’s large-scale installation, Waste Not, along with a selection of Song Dong’s video installations and photography, including new works, YBCA is the first institution to present Waste Not in the larger context of the artist’s work focused on his family.

Born in Beijing in 1966, Song Dong has been a significant figure in the development of Chinese conceptual art since the early 1990s. His practice incorporates performance, photography, projection, video and installation, paying careful attention to the social and spiritual implications of China’s rapid development.

The centerpiece of Song Dong: Dad and Mom, Don’t Worry About Us, We Are All Well is the much heralded, large-scale installation Waste Not comprised of over 10,000 items ranging from pots and basins to blankets, bottle caps, toothpaste tubes and stuffed animals collected by the artist’s mother over the course of more than five decades, beginning with the Cultural Revolution.

The exhibition includes a selection of the artist’s videos, photographs and a newly commissioned work. Collectively, the works create a longitudinal portrait of Song Dong’s use of art as a way to form closer bonds with his mother and father, as well as his siblings, wife and daughter and to express the power of the family as a social unit. Other works in the exhibition include Touching My Father (1997), Father and Son in the Ancestral Temple (1998), Listening to My Family Talking about How I Was Born (2001) and Chinese Medicine Healing Story (2011), all of which use photo-based imagery to consider familial identity, individuality and the legacy of ancestors.

In tandem with the exhibition, YBCA has organized two public programs. On Saturday, February 26, 2 p.m. – 4 p.m. there will be a roundtable discussion focusing on the work of Song Dong. Issues to be discussed include his work’s relationship to that of other artists who emerged in China in the 1990s; the impact his work has had on the younger generation of Chinese artists; and how his work has been received both inside and outside of China. Present at this roundtable discussion will be the artist himself, joined by eminent art historians Britta Erickson, Wu Hung and Zheng Shengtian.

On Friday, April 15, 7pm, YBCA will present “Break on Through to the Other Side…”, a compilation of videos of Chinese performance art curated by Malcolm Ferris, Research and Academic Development Director at Plymouth College of Art in Devon, England. Included in this screening are the artists Ji Sheng Lu, Tian Yibin, Sun Ping, He Yunchang, The Gao Brothers, Wang Chuyu, Xia Jianguo, Zhang Minjie, among others.

Both public programs are free with gallery admission.