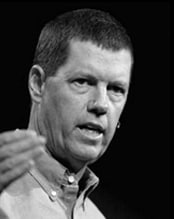 Another interesting Chuchill Club event is being held here in Silicon Valley.

This time, Sun co-founder and former CEO and Chairman Scott McNealy will appear in conversation on stage with moderator Ed Zander, who formerly ran Motorola (and was also previously President at Sun).

The event takes place at the Santa Clara Hyatt on Thursday, February 24.

Scott McNealy (born November 13, 1954) is the co-founder of Sun Microsystems, the computer technology company he started in 1982 along with Vinod Khosla, Bill Joy, and Andy Bechtolsheim.

Sun Microsystems, along with companies such as Silicon Graphics, 3Com, and Oracle Corporation, was part of a wave of successful startup companies in California’s Silicon Valley during the early and mid-1980s. In 1982, McNealy, who was then manufacturing director at Onyx Systems,[1][2] a vendor of microprocessor-based Unix systems, was approached by fellow Stanford alumnus Khosla to help provide the necessary organizational and business leadership for the fledgling company. The name “Sun” was derived from Bechtolsheim’s original SUN (Stanford University Network) computer project.[2]
In 1984, McNealy took over the CEO role from Khosla, who would ultimately leave the company in 1985. On 24 April 2006, McNealy stepped down as CEO after serving in that position for 22 years, and turned the job over to Jonathan Schwartz. McNealy is one of the few CEOs of a major corporation to have had a tenure of over twenty years.

Unlike most people who become involved in high technology industries, Scott McNealy did not come from the world of amateur programmers, hackers, and computer scientists. Instead, his background was in business, having earned a Bachelor of Arts in Economics from Harvard and an MBA from the Stanford Graduate School of Business. Prior to college, he graduated from Cranbrook Schools in Bloomfield Hills, Michigan, where his father was in the automotive industry; most of his work experience prior to joining Sun was in automotive manufacturing.

Edward J. Zander (born January 12, 1947, in Brooklyn, New York) is an American business executive. He was CEO and Chairman of the Board of Motorola from January 2004 until January 2008, remaining as chairman until May 2008. His work in the technology sector included management positions at Data General and Apollo Computer before joining Sun Microsystems in 1987 where he was later promoted to Chief Operating Officer and President in 1998 and 1999, respectively. He left Sun in 2002 to become managing director at Silver Lake Partners, a private-equity firm.