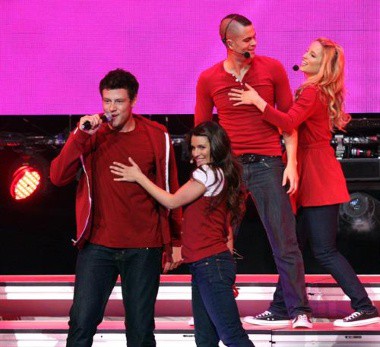 Organizers have announced that due to overwhelming demand, a second Glee concert has been added on May 25th at the HP Pavilion at San Jose. A special presale for the May 25th show begins at 5pm today at www and runs through February 18th at 10pm. Tickets for the May 24th and newly announced May 25th shows are $93.00 and $53.00 for reserved seats plus applicable charges. Tickets for both shows go on sale to the general public on Saturday, February 19th at 10am at Livenation.com.

The North American engagement of Glee Live! In Concert! is a unique concert experience once again conceived by Murphy that will include live performances of some of the show’s most memorable musical numbers from Seasons One and Two, including “Empire State of Mind,” “Toxic,” “My Life Would Suck Without You,” “It’s My Life,” and of course, the show’s anthem, “Don’t Stop Believin’.” Described by the Los Angeles Times as “triumphant,” USA Today called last year’s concerts “equal parts musical theater, giddy pop culture phenomenon and Journey-loving rock show.”

“The cast and I were so moved by the love and enthusiasm of our fans at last year’s concerts that we knew we had to do it again,” said Murphy.
“There is something magical about thousands of ‘Gleeks’ coming together to share a special night with our cast, and this tour is one way we can thank them for their unbelievable support from the beginning.”

“Joining the cast this year has been like hopping on a fast-moving train,” commented Overstreet. “I have already had so many incredible experiences, but the chance to perform live on stages across the U.S., Canada and Europe takes the cake. This is too cool.”

“Joining the cast of ‘Glee’ has been an amazing, rewarding and humbling experience all at once,” added Criss. “On top of all of that, I’m fortunate to play such a strong and interesting character like Blaine that speaks volumes to fans. Now I have the chance to perform for thousands of them this summer, and I couldn’t be more excited!”

In its sophomore season, “Glee” is a biting musical comedy that has quickly become a pop-culture phenomenon. This season’s No. 1 entertainment series among Teens and a Top 3 series among Adults 18-49 and 18-34 boasts critical acclaim, a loyal fan base of “Gleeks,” two Platinum and two Gold albums, two Grammy Award nominations, more than 16 million song downloads, the record for the most titles on the Billboard Hot 100 by a non-solo act (beating out The Beatles), the No. 1 soundtrack of 2010 (“The Christmas Album”), an incredible 19 Emmy and 11 Golden Globe nominations – earning it the distinction of being the most-nominated series of the year – and four Emmy Awards. To top it off, the genre-defying, award-winning series has been picked up through its third season.