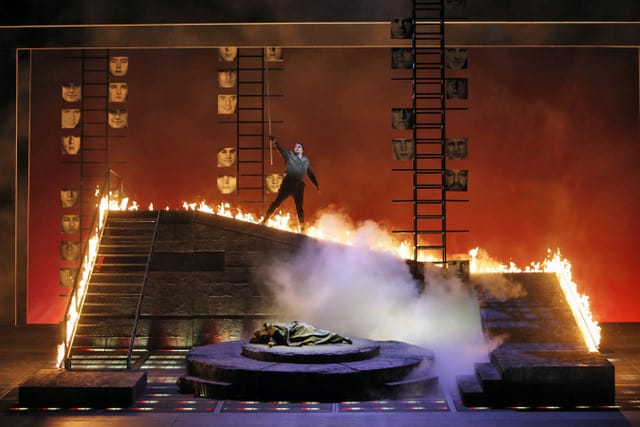 In conjunction with San Francisco Opera’s presentation of Richard Wagner’s Der Ring des Nibelungen (The Ring of the Nibelung), a diverse array of cultural and educational institutions have partnered with San Francisco Opera to present the San Francisco Ring Festival, a Bay Area-wide celebration that includes lectures and symposia, exhibits, musical performances, film screenings and other events for audiences who desire to connect with the work in new and compelling ways.

San Francisco Opera will present Richard Wagner’s epic four-opera cycle, May 29–July 3, 2011 at the War Memorial Opera House. The four operas in this new production by San Francisco Opera artistic adviser and internationally celebrated director Francesca Zambello—Das Rheingold, Die Walküre, Siegfried and Götterdämmerung—are presented for the first time as a complete cycle. One of the greatest works ever conceived for the operatic stage, Der Ring des Nibelungen is presented in three complete cycles (June 14–19, June 21–26, and June 28–July 3) in addition to stand-alone performances of Siegfried (May 29) and Götterdämmerung (June 5). In conjunction with the Ring cycles, a diverse array of cultural and educational institutions have partnered with San Francisco Opera to present lectures and symposia, exhibits, musical performances, film screenings and other events throughout the Bay Area for audiences who desire to connect with the Ring in new and compelling ways.

Three complete cycles will be presented each in their entirety over the course of one week as the composer originally intended. These cycles each begin on a Tuesday evening and conclude on a Sunday afternoon, and they will take place June 14–19, June 21–26, and June 28–July 3. All performances are presented at the historic Beaux Arts style War Memorial Opera House. Preceding the Ring cycles, San Francisco Opera will present one performance of Siegfried on May 29 and one performance of Götterdämmerung on June 5. Das Rheingold, Die Walküre, and Siegfried are co-productions with Washington National Opera; Götterdämmerung is a new San Francisco Opera production premiere.

An internationally renowned cast featuring some of the greatest Wagnerian singers of our time has been assembled for San Francisco Opera’s highly anticipated new presentation of Der Ring des Nibelungen. The cast for this complete Ring cycle varies from that of San Francisco Opera’s previous productions of Das Rheingold in June 2008 and Die Walküre in June 2010.

Tenor Ian Storey makes his Company debut and his Ring cycle role debut as Siegfried and Gordon Hawkins also makes his Company debut as Alberich, a role he sang to great acclaim at Washington National Opera. Russian mezzo-soprano Larissa Diadkova appears as Fricka and David Cangelosi returns as Mime. Soprano Anja Kampe makes her Company debut as Sieglinde, a role she recently sang in Die Walküre at Washington National Opera and Los Angeles Opera, and American tenor Brandon Jovanovich makes his role debut as Siegmund and also appears as Froh. Former Adler Fellow Heidi Melton will sing Sieglinde on the June 29 performance of Die Walküre as well as the Third Norn in Götterdämmerung.

San Francisco Opera has long been regarded as one of the world’s leading companies to present the entire Ring cycle, with past acclaimed presentations at the War Memorial Opera House in 1935, 1972, 1985, 1990 and 1999. The Company presented a partial Ring cycle in 1936, omitting Siegfried. The City of San Francisco played host to two other presentations of the Ring in 1900 by the Metropolitan Opera at the Grand Opera House, led by famed conductor Walter Damrosch, and a partial Ring cycle in 1931 (omitting Das Rheingold) by the Grand German Opera Company in Civic Auditorium. Ticket sales for this highly anticipated presentation have already reached 78% of capacity.