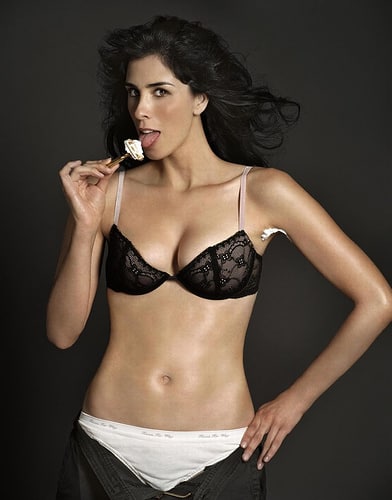 Emmy Award-winner Sarah Silverman, a versatile performer dubbed “the most outrageously funny woman alive” by Rolling Stone, will headline Cal Performances’ Zellerbach Hall for one night only, Monday, April 11 at 8:00 p.m. Known for her audacious performances in film and television, stand-up comedy and online videos, she recently added author to her resume when she released her first book, The Bedwetter: Stories of Courage, Redemption, and Pee, spring 2010.

Silverman, who employs edgy, controversial material and language was most recently seen starring in the third season of “The Sarah Silverman Program,” on Comedy Central in which she was nominated for a 2009 Primetime Emmy in the Outstanding Actress in a Comedy Series category for her portrayal of a fictionalized version of herself.

Silverman’s Berkeley performance will include reading from her book, playing her guitar, discussing her singular take on life and fielding questions from the audience. Special guest Chelsea Peretti, named one of the top ten comics to watch by Variety and currently writing for the hit NBC show Parks and Recreation, will open the event.

Among her other awards, Silverman counts a 2008 Primetime Emmy in the Outstanding Original Music and Lyrics category for her musical collaboration with Matt Damon. In addition, she was honored with a Best Actress Webby Award last year for her online video “The Great Schlep,” in which she persuaded young Jewish kids to encourage their grandparents in Florida to vote for President Obama prior to the 2008 election.

On the film side, Silverman has wrapped production on the comedy Peep World, opposite Rainn Wilson and Michael C. Hall, which is about a group of dysfunctional adult siblings who are fighting over a novel that one of them is writing about the family.

In 2004 Silverman made an impressive splash with her concert film Sarah Silverman: Jesus is Magic. Directed by Liam Lynch, the film garnered major attention at the Toronto Film Festival and created huge national buzz. Silverman also garnered critical praise in the documentary feature, “The Aristocrats” in which 100 of the industry’s most prominent comedians tell a version of the same joke. Her other film credits include, Saint John of Las Vegas, I Want Someone to Eat Cheese With, School for Scoundrels, The School of Rock, There’s Something About Mary, The Way of The Gun, The Bachelor, and Say It Isn’t So.

Silverman co-starred on the Fox comedy “Greg the Bunny”, and has guest starred in a slew of acclaimed and notable television shows such as “Monk,” which earned her an Emmy nomination in 2008 in the Outstanding Guest Actress in a Comedy Series category, “The Larry Sanders Show,” “Seinfeld,” and “Mr. Show with Bob and David.” Silverman has also lent her voice to the Comedy Central show “Crank Yankers.”

Silverman grew up in New Hampshire and attended New York University. In 1993 she joined “Saturday Night Live” as a writer and feature performer and has not stopped working since. She currently resides in Los Angeles with her dog Duck.