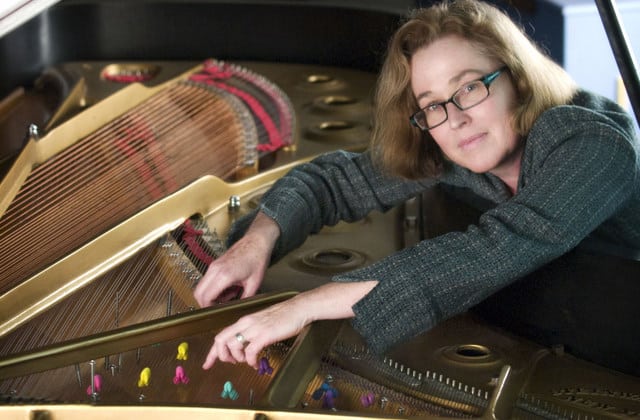 Compositions by this globally-acclaimed composer have been performed at Carnegie Hall, the Kennedy Center, and throughout Europe. Her newest work will be performed under the baton of renowned guest conductor George Cleve. For this program, the California Symphony proudly showcases three of the region’s finest orchestral musicians: flutist Monica Daniel-Barker, clarinetist Jerome Simas, and violist Marcel Gemperli.

GEORGE CLEVE, CONDUCTOR
Internationally acclaimed as an interpreter of the works of Mozart, Mr. Cleve has conducted the National Philharmonic Orchestra of Russia in Mozart’s 41st Symphony and Schumann’s 4th Symphony for a series featuring the last symphonies of great composers. In recent seasons, Mr. Cleve has conducted Mozart and Brahms for Symphony Silicon Valley and Don Giovanni for Opera San José. He made his fourth appearance in Moscow conducting Brahms for the State Academic Orchestra in Fall 2006. Directly following Moscow, he made his debut with San Francisco Opera conducting Bizet’s Carmen, as well as opening the San Francisco Ballet season conducting Divertimento No. 15 by Mozart/ Balanchine. Guest engagements last season included a fifth return to Moscow for concerts with the National Philharmonic of Russia, performances of The Firebird with the San Francisco Ballet, and concerts with Symphony Silicon Valley. He has appeared with most of the North American orchestras, including the New York Philharmonic, Los Angeles Philharmonic, Boston, Cleveland, Pittsburgh, San Francisco, and Montreal Symphonies, and many others. Mr. Cleve was awarded the rank of Officier of the Order of Arts and Letters of the Republic of France in recognition of his performances of French music.

CINDY COX, COMPOSER
Cindy Cox has received awards and commissions from the American Academy of Arts and Letters, the National Endowment for the Arts, the American Composers Forum, ASCAP, Meet the Composer, and the Gemeinschaft der Kunstlerinnen und Kunstfreunde International Competition for Women Composers. She has been a Fellow at the Tanglewood Music Center, Aspen Music Festival, MacDowell Colony, and Civitella Ranieri and William Walton Foundations in Italy. Cox’s music is noted for its special tunings, harmonies, and textural colorations, such as the new viola and piano work Turner and the piano trio la mar amarga. Her pieces also frequently make use of technology, as in the amplified sextet with digital effects Axis Mundi, and the trombone quartet and interactive electronic work Nature is. Many of her compositions are for solo piano, and as a pianist she has performed and recorded her new Sylvan pieces, the Hierosgamos, and The Blackbird whistling/Or just after. The newer texted works, such as Singing the lines and The Other Side of the World for flute and electronics evolved through long association with her husband, poet John Campion.

Performances of Cox’s works have taken place at the Festival di Musica Contemporanea at the American Academy in Rome, the Festival Architecture et Musique in Angers, France, the Kosmos Frauenraum in Vienna, Carnegie and Merkin Halls in New York City, the National Gallery in Washington, the Library of Congress, the Kennedy Center, the Los Angeles Philharmonic Green Umbrella series, and by notable ensembles such as the Kronos Quartet, the American Composers Orchestra, the National Symphony, the Alexander Quartet, the Paul Dresher Ensemble, the San Francisco Contemporary Music Players, the Women’s Philharmonic, Composers Inc., and the Earplay Ensemble. A new recording on the Albany label features the large piano cycle Hierosgamos (performed by the composer), Axis Mundi (Earplay Ensemble), and Nature is (Continental Trombone Quartet). She is also recorded on Capstone, Arpa Viva, Inflorescence, CRI (currently New World), Mark, and Valve-Heartz of Cologne.
SOLOISTS

Houston-based flutist Monica Daniel-Barker has held positions in the Phoenix Symphony, Santa Fe Symphony, New Mexico Symphony Orchestra, Chamber Orchestra of Albuquerque, IRIS Orchestra, and Tulsa Philharmonic and performed as soloist with many other regional symphonies. She is currently Principal Flutist in the California Symphony, as well as the Marin Symphony. Ms. Daniel-Baker has won a number of American competitions, and received international recognition as prizewinner at the Internazionale di Flauto “Domenico Cimarosa”, held in Aversa, Italy, and by advancing in the prestigious Kobe Flute Competition, held every four years in Japan.

Jerome Simas is currently principal clarinetist with the California Symphony, as well as the Oakland East Bay Symphony, and the Left Coast Chamber Ensemble. He has held positions with both the San Francisco Opera Orchestra (principal clarinet) and the San Francisco Symphony, with whom he toured Europe, China, and the U.S., and recorded the complete Mahler Symphonies with Michael Tilson Thomas. He has performed as soloist with the New World Symphony, Monterey Symphony, Modesto Symphony, and Iris Chamber Orchestra, and frequently appears with motion picture studio orchestras
at Skywalker Ranch. He won First Prize at the International Clarinet Society’s Young Artist Competition, and Grand Prize at the Fischoff National Chamber Music Competition. He studied at the Tanglewood Music Center and was a fellow of the New World Symphony, with whom he recorded Rhapsody in Blue and Stravinsky’s Ebony Concerto for BMG Classics.
Marcel Gemperli began viola study at the age of nine in his native New York state. After graduating from Harvard University, he continued his viola studies in Germany and Switzerland. Mr. Gemperli currently serves as Principal Viola of the California Symphony and also performs with many Bay Area ensembles, including the San Francisco Symphony and the San Francisco Ballet Orchestra. He is much in demand at summer music festivals such as the Mendocino Music Festival, Telluride Chamber Music Festival and the National Repertory Orchestra.

The evening’s program will include the Flute Concertino, op. 107, D major by French composer Cécile Chaminade (1877–1944). Chaminade wrote prolifically, with nearly all her approximately 400 compositions published during her life time. Something of a prodigy, she began composing sacred music by the age of eight; it was George Bizet who recommended she receive formal training. She composed a wide range of material, including orchestral pieces (the successful piano Conzertstucke, the flute Concertino, a choral symphony, a comic opera, and a ballet), but her most popular works were for the piano, most of them character pieces, and more than 125 melodies. She made extensive concert tours as a pianist, performing regularly in England, including as a guest of Queen Victoria, and during her lifetime gained enormous followings in France, Britain and the US. There were well over 100 Chaminade Clubs formed around 1900, and in 1908 she made a successful tour of twelve American cities. In 1913, she was awarded the Légion d’Honneur, a first for a female composer. As late-Romantic French music fell out of favor in the latter 20th century, interest in her music diminished, and her vast body of work was largely relegated to obscurity after her death. This Flute Concertino, composed for the 1902 Paris Conservatoire Concours, is perhaps her most enduring legacy.

California Symphony is delighted to present a gem by Max Bruch (1838 – 1920), a German composer known primarily for his works for the violin. His Violin Concerto in G minor is one of the most popular Romantic violin concertos, and his Scottish Fantasia and the Second Violin Concerto also remain in regular repertoire. Bruch’s first official appointments were as Kapellmeister, in Koblenz, Sondershausen, Berlin, and finally Bonn, where he dedicated himself to composition. At the height of his reputation he spent three seasons as conductor of the Liverpool Philharmonic Society (1880-83). The Concerto for Clarinet, Viola, and Orchestra in E minor, Op. 88 to be performed by the California Symphony was composed after his retirement in 1911 for his son, Max Felix Bruch. It received its first performance in 1912, with Willy Hess (viola) and Max Felix Bruch (clarinet) as the soloists.

While Antonin Dvořák’s (1841 – 1904) Symphony No. 7 in D minor, Op. 70, B. 141, now goes by that title, it was originally published as No. 2, and even so was not his seventh or second symphony , but his fourth. The numbering of Dvořák’s symphonies has been spectacularly muddled: they were initially numbered by order of publication, not composition, in addition to which the first four symphonies to be composed were published after the last five. And if that were not confusing enough, the last five symphonies were not published in order of composition. This explains why, for example, the New World Symphony was originally published as No. 5, was later known as No. 8, and ultimately renumbered as No. 9 in the critical editions published in the 1950’s. The Symphony now known as No. 7 was written after Dvořák first visited London in 1884 to hear his Stabat Mater performed to great acclaim.

As a result of this stunning debut, The London Philharmonic society invited him to write a new symphony, and elected him as an honorary member. Dvořák returned to Prague, where on his daily walk to the railway station he said “the first subject of my new symphony flashed in to my mind on the arrival of the festive train bringing our countrymen from Pest.” The Czechs he noticed were coming into town for a musical evening to support the political struggles of the Czech nation and he determined that his symphony would reflect this upheaval. On completing a sketch of the 1st movement he wrote to friend: “I am now busy with this symphony for London … God grant that this Czech music will move the world!!”

On finishing his sketch of the slow movement, he added a footnote, “From the sad years.” He may be referring to recent death of his mother, and the previous death of his eldest child, or the deeper struggles of his nation. He wrote to a friend, “What is in my mind is Love, God, and my Fatherland.” The movement starts on a peaceful theme, then turns to phrases of turmoil. He told his publisher “there is not one superfluous note.” Dvořák said the 4th movement includes a suggestion of the capacity of the Czech people to display stubborn resistance to political oppressors. It was completed on March 17, 1885 and received its premiere in London with Dvořák himself conducting on April 22, 1885, where it was received with acclaim.

California Symphony, currently in its 24th season, recently announced the appointment of Walter Collins as Executive Director. Contra Costa County’s only professional orchestra, the company has been lauded for nurturing the careers of promising new soloists and composers, as well as providing acclaimed traditional orchestral performances, spotlighting new and recent American contributions to the symphonic repertoires, and developing and performing programs that attract and engage new audiences. Said Collins, “We are looking forward to presenting what should be a true highlight of our season with this highly anticipated concert.”