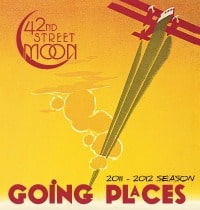 Greg MacKellan and Stephanie Rhoads, producing artistic directors of 42nd Street Moon, today announced details of the upcoming 2011-12 season of uncommon musical theater. For its nineteenth season, the company takes its audience on the journey of a lifetime, with the Eureka Theatre serving as a portal to eras and locations that are exotic, glamorous and exciting.

The legendary American composers, lyricists, and librettists who will serve as guides include Jerome Kern, George and Ira Gershwin, Cole Porter, John Kander and Fred Ebb, Jule Styne, and more.

“Some of the most interesting Moon shows have been musicals where we transported the audience to another time or place,” said Greg MacKellan. “We’ll be announcing an exciting multi-year project next season, and it’s one that won’t lead us “overseas” for a while. So, for our last season before our 20th anniversary celebration in 2012-13, we wanted to concentrate on shows that do lead the audience on a journey.”

The five shows for 2010-11 are NYMPH ERRANT, OH, KAY!, THREE SISTERS, SUGAR, and ZORBÁ. The season also continues the multi-year celebration of the musicals of composer Jerome Kern and lyricist Ira Gershwin, as well as the special series of Salon Evenings at the Alcazar Theatre, this time focusing on Cole Porter and Jerry Herman.

The journey begins with NYMPH ERRANT (1933), Cole Porter’s madcap tour of 1930s Europe, and his personal favorite, in which a newly graduated English schoolgirl sets off to travel the continent in search of adventure, romance and sex. But even in the most exotic locales, a torrid affair eludes her. Porter’s songs include “The Physician,” “Experiment,” “How Could We Be Wrong,” and “It’s Bad for Me.” This production will be directed by Greg MacKellan.
Dates: Low-priced previews: Oct. 5, 6, 7 Opening: Sat. Oct. 8 through Oct. 23.

In early November, the tour continues to a Long Island estate with OH, KAY! (1926) by George and Ira Gershwin, with book by Guy Bolton and P.G. Wodehouse. A trio of English bootleggers land smack in the middle of romantic intrigue and hi-jinks at the height of Prohibition. The dazzling Gershwin songs include the evergreen “Someone to Watch Over Me,” “Fidgety Feet,” “Clap Yo’ Hands,” “Do, Do, Do,” and “Maybe.” Skinny Ennis will serve as director.
Dates: Low-priced previews: Nov. 2, 3, 4 Opening Sat. Nov. 5 through Nov. 20

In late November, 42nd Street Moon returns to World War I England for the American premiere of THREE SISTERS (1934), with music by Jerome Kern, book and lyrics by Oscar Hammerstein II. Greg MacKellan directs this NEA-sponsored restoration of a Kern/Hammerstein lost musical, in which a photographer and his daughters travel the world of derbies and carnivals. The youngest falls in love with a roving street singer, who is lured back to the wandering life, and to World War I. The delightful songs include “I Won’t Dance,” “Lonely Feet,” “Hand in Hand,” and “My Beautiful Circus Girl.”
Dates: Low-Priced previews Nov. 30, Dec. 1, 2 Opening Sat. Dec. 3 through Dec. 18

The first show of 2012 is set in Chicago and Miami in 1929. SUGAR (1972), with music by Jule Styne and lyrics by Bob Merrill, is based on Billy Wilder’s screenplay Some Like It Hot, in which two musicians witness a gangland massacre and hit the road, disguised as ladies! Outrageous and zany, this farcical delight will be directed by Dyan McBride, and features such songs as “Doin’ It for Sugar,” “Penniless Bums,” “Sun on My Face,” “Hey, Why Not?” and “November Song.”
Dates: Low-Priced Previews April 4, 5, 6 Opening Sat. April 7 through April 22, 2012

Finally, 42nd Street Moon journeys to Greece and Crete, for the Kander and Ebb classic, ZORBÁ (1968), which will be directed by Greg MacKellan. Based on the book Zorbá the Greek by Nikos Kazantzakis, this rich, uncompromising musical is a salute to the spirit of Greece, where Zorba celebrates life – the sound of the bouzouki, the taste of an olive, the scent of a woman – but also lost love, heartbreak and death. Great songs include “Life Is,” “The Butterfly,” “Only Love,” “Why Can’t I Speak,” and “I Am Free.”
Dates: Low-Priced Previews May 2, 3, 4 Opening Sat. May 5 through May 20

WHAT A SWELL PARTY! The Cole Porter Salon, September 15, 2011 at 7 pm
Broadway’s dapper party boy and one of its most popular songwriters, Cole Porter wrote standards that are still the backdrop for everyone’s lives: “Night and Day,” “You’re the Top,” “Just One of Those Things,” “What Is This Thing Called Love?,” “It’s All Right With Me,” “C’est Magnifique,” “Let’s Do It,” “At Long Last Love” … the list is endless, but there are also surprises such as “You Irritate Me So,” “Fish,” and “I’m Throwin’ a Ball Tonight!”

THE BEST OF TIMES The Jerry Herman Salon, January 26, 2012 at 7 pm
An 80th Birthday salute to another beloved Broadway tunesmith! Jerry Herman’s career began as Cole Porter’s was ending, and his shows lit up Broadway through the 1960s, 70s, 80s and into the 90s. “Through the Bottom of the Glass,” a little known song from Dear World, typifies the Jerry Herman worldview: you just have to know where to aim your gaze, and life as it should be reveals itself. “Open a New Window,” “Hello, Dolly!,” “It Only Takes a Moment,” “Mame,” “Take Me Back,” “It’s Today!,” “Milk and Honey,” “Shalom,” “Time Heals Everything,” “I’ll Be Here Tomorrow,” “I Am What I Am” – these great songs and more will radiate from the Alcazar stage for one special evening.

OH, KAY! (1926)
Music & Lyrics by George and Ira Gershwin
Book by Guy Bolton and P.G. Wodehouse
Directed by Skinny Ennis
Hi-jinks and romance among the posh Long Island set at the height of prohibition!
November 2 – 20, 2011

SUGAR (1972)
Music by Jule Styne
Lyrics by Bob Merrill
Book by Peter Stone
Based on a screenplay by Billy Wilder and I.A.L. Diamond
Directed by Dyan McBride
Some Like it Hot — The classic movie now sings to a jazzy Styne/Merrill Beat!
April 4 – 22, 2012

ZORBÁ (1968)
Music by John Kander
Lyrics by Fred Ebb
Book by Joseph Stein
Based on the book Zorbá the Greek by Nikos Kazantzakis
Directed by Greg MacKellan
A rich, uncompromising musical salute to Greece – and the spirit of life!
May 2 – 20, 2012