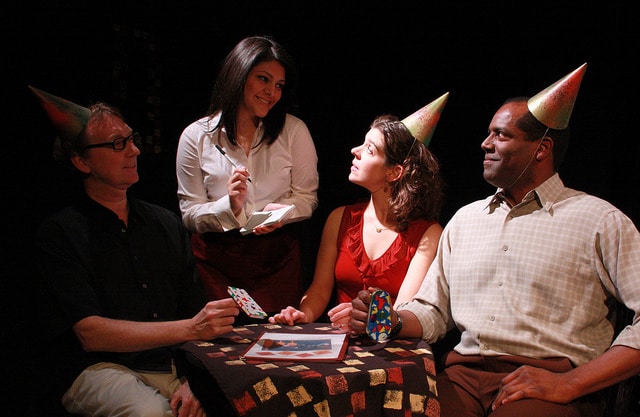 Guest post by Pat ReardoIn this complicated story of love, lust, loss and lies nothing is what it seems and everything is subject to question.

The first act of Steven Dietz’s Private Eyes sucks the audience in when an aspiring actress Lisa (Kelly Rineheart) auditions unsuccessfully with Matthew (Fred Pitts) an overbearing and dismissive director. All seems futile until later when they meet again in the restaurant where Lisa works. As the two seem ready to succumb to their mutual attraction, the audience is rudely pulled elsewhere by the booming voice of Adrian (Martin Gagen), an off-stage director who jolts the audience into realizing that everything that went before was just a rehearsal in a play.

The evening goes on in this fashion with the plot jumping back and forth between fantasy and reality in this play within a play while Lisa, Matthew and Adrian experience the destructive nature of love affairs and the ultimate numbing effect of ongoing deception.

Kelly Rineheart is excellent as the lust-struck wife Lisa whose affair with the director Adrian feeds into her alternate role as a cheating spouse. Fred Pitts is moving as his cool nuanced Matthew stoically transforms himself in the play and the play within a play from trusting husband to rejected partner. Sara Luna’s Cory, the waitress/private eye/abandoned wife and Vic Prosak the deceitful psychiatrist brought well needed comedic lightness to the evening. And, most importantly, Gagen’s impeccable timing and delivery made his stand-out Adrian a force to contend with. Played with pompous perfection, he delights us when we see Adrian taken down several notches by the end of the second act.

The diminutive Dragon Productions again delivers a production with a big punch. This theatrical turducken is saved by some very snappy and witty dialogue ably delivered by the excellent cast. The first act flies by as the audience, lulled by the novelty of the plot twists, adjusts back and forth between the alternate realities. Unfortunately as the evening moves on, the viewer begins to feel a bit numbed by the ongoing and repetitive turns of events and … dare I say it … deceptions. Perhaps this is as Steven Dietz planned it.