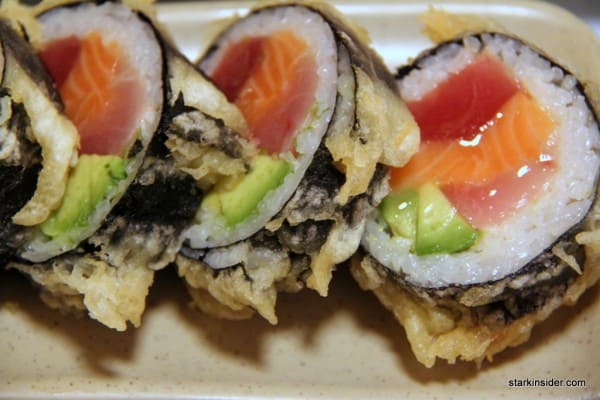 I peered outside the car window at the dark and wet intersection the GPS had concluded was Sushi Zono. I have spider senses for sushi and they were not going off. There was no way at this cement dominated intersection, there would be an oasis of raw fish.

I glanced over again at the GPS system and was struck again by the saying, Garbage in, garbage out. We had entered the address of “831 East Hamilton Avenue”. The address of Sushi Zono in Cambell is WEST Hamilton Avenue, not east. Fortunately for us, the error had not led us off a bridge or onto someone’s front yard. Luckily, the actual location of Sushi Zono was only 5 minutes away and we would make our 7 pm reservations.

It was Wednesday night so I was pretty startled when I entered the unassuming entrance of Sushi Zono and was greeted with a boisterous, busy atmosphere. On the wood panel wall on the right of the entrance hung the many accolades and awards the restaurant has received over the years. A quick check on Yelp reviews concurs with many 4 and 5 star ratings. For those that had less than stellar things to say about the place, it mainly had to do with slow service when the place is busy or the conditions of the restaurant.

I wasn’t sure about the service yet. They didn’t have a record of my reservations when I arrived. I had called in 50 minutes earlier to make a reservation. Fortunately, they said a table was available so it wasn’t a big deal. The decor of the restaurant is not slick like Blowfish Sushi in Santana Row and one can tell this family-owned restaurant has been around for some time and has been well-frequented by many patrons.

Here is where the quality of the sushi plays a critical role.

If the sushi is stellar, modest decor can be an asset. There is an authenticity to a restaurant that doesn’t have grand visual spectacles. “It’s all about the food!” And Seinfeld has made the “bad service, but to-die-for cuisine” trendy with his Soup Nazi character.

Our party of four was seated at the far corner of the restaurant. It was a type of spot that makes you worry if the world would forget you and you would grow old there. The nice waitress then left.

We waited a while, but no menu came. I glanced around and there were many families are large groups seated in the cozy restaurant. The prices were very reasonable for a sushi restaurant and the clientele was a testament to this.

Finally, I decided to take matters into my own hands, got up and retrieved a few menus for our table. I really didn’t mind and for a moment, I had the feeling like I was at a large family gathering where you pitched in to get what needed to be done, done.

The waitress did come by and was very apologetic and explained how just before we showed up, three large groups arrived. Seeing the newly seated people in the restaurant, I could believe it. The restaurant seemed to only have two servers working the tables. For how bustling the place was, they were doing a great job. We ordered our green teas, water and beers.

We decided on family-style and seeing the restaurant was really busy, I decided to place our entire order at once. When the waitress came by, she was very apologetic on how long it took to come by Sometimes at sushi restaurants, I will order a few things to start and see what the restaurant is really good at. Some excel at the traditional nigiri sushi or sashimi while others specialize in creative fusion rolls.

The dishes took about 35 minutes from the time we ordered them to when we got our order. I did send Clint to the sushi bar to check on our order during this time. When the food came though, it came fast and furious. We had to juggle a couple of dishes on our table to fit our entire order. The portions were generous. For four people, I ordered plenty.

Their Deep Fried Ice Cream ($6.50) for dessert sounded sinfully delicious. Unfortunately, after such a sushi feast, none of us at the table had any room for dessert. Perhaps the next time.

In the end, the wait was definitely worth it. The sushi was fresh and expertly prepared. The Vegas roll and the Hamachi Sashimi Dinner are “must try” dishes at Sushi Zono. I can see why the restaurant has so many loyal, returning patrons.