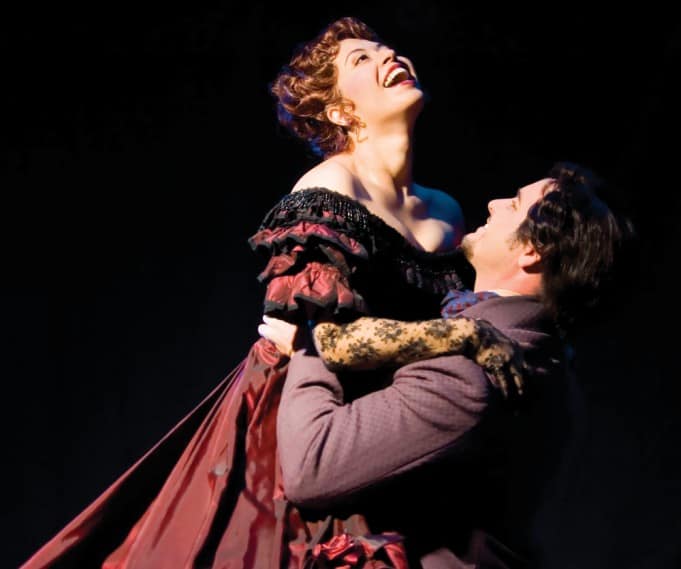 Opera San Jose General Director Irene Dalis has announced repertoire for the company’s 28th season to begin Saturday, September 10 with the company premiere of Mozart’s first dramatic masterwork Idomeneo, the mythical tale of the king of Crete set at the end of the Trojan War. George Cleve, founder and music director of the Midsummer Mozart Festival, conducts, with stage direction by Brad Dalton.

“Next season we will offer the public Mozart’s favorite opera, Leoncavallo’s best opera, a tour de force for a single voice by the French master, Poulenc, America’s favorite Verdi opera, and Queen Victoria’s favorite opera of all time. That’s quite a line up!” says General Director Irene Dalis. “As always, we select operas that best suit the artists in our resident company, and these operas will fit like a glove.”

All performances will be held at the California Theatre, 345 South First Street in downtown San José.

An epic work of music drama that changed the course of Mozart’s operas, Idomeneo is the mythical tale of the king of Crete, returning home from the Trojan War. To gain a safe return to shore during a violent storm at sea, Idomeneo vows to sacrifice to Neptune the first person he sees on land. Unfortunately, it’s his son, Idamante, so Idomeneo flees instead of greeting him. Idamante, meanwhile, is in love with Ilia, the captured daughter of the king of Troy. Neptune, cheated out of his sacrifice, sends a sea monster to ravage Crete. Idamante slays the monster and presents himself for sacrifice, but Ilia comes between them declaring her love for Idamante. Will the gods be appeased? A divine voice declares that Idamante and Ilia shall reign as the new king and queen of Crete.

Mozart was just 25-years-old when his mythological music drama premiered in Munich on January 29, 1781. Idomeneo is considered to be his first dramatic masterpiece and was his personal favorite of all his operas.

A jealous husband and a jilted lover, both in the depths of an emotional crisis; this pairing of two intensely dramatic operas explores the human psyche in a perfect union of music and drama.

Leoncavallo’s Italian opera Pagliacci is the tale of Canio, the leader of a traveling commedia dell’arte troupe. He is the clown who must laugh, and make others laugh, while masking his own grief after learning that his wife Nedda has betrayed him with another man. In the end, art meets tragedy in a rage of passion and jealousy.

La voix humaine, Poulenc’s French monodrama, follows a young woman’s emotional phone conversation with an unseen former lover. He is discarding her to marry another woman, and she is desperately trying to win back his love. Set in 1940’s Paris, this one-act opera paints an emotional portrait of an abandoned woman teetering on the edge during an affecting and engaging monologue.

Violetta Valéry is a famed courtesan, glamorous, yet fragile. It is 1889 Paris and the celebrated beauty has thrown a lavish party where she meets the young admirer Alfredo Germont. He has long loved her, and she is so taken with his sincerity that she abandons her life of luxury and retreats to the country to be with him. But when met with the disapproving eye of Alfredo’s father, Violetta regrettably agrees to end the affair and go back to Paris. A jealous Alfredo denounces her, but when he learns of her sacrifice he returns to beg her forgiveness, only to discover she has but moments to live.

Verdi’s romantic tragedy La traviata is overflowing with some of the most unforgettable music in all of opera. His melodies, rich in passion and drama, made him the master of his time and this legendary tale of love and sacrifice has touched the hearts of both the opera novice and long-time opera lover for generations.

Inspired by Goethe’s legendary story, Gounod’s opera is the timeless tale of the malevolent Méphistophélès, the devil in the flesh, who seduces the old scholar Faust, promising him the elixir of youth in exchange for his soul. Faust is transformed into a young, handsome man and sets out with his devious companion to experience the pleasures of the world. Faust seduces the beautiful and innocent Marguerite, only to abandon her before she gives birth to his child. Her reputation destroyed, but not beyond redemption, Marguerite calls upon the angels for salvation. Faust receives no such escape and is condemned to his devilish fate in this spiritual conflict between Heaven and Hell. Faust premiered in Paris in 1859 and is one of the most performed operas of all time.

Time: All performances at 8 pm, except Sundays at 3 pm