Music Director Nadja Salerno-Sonnenberg and the New Century Chamber Orchestra will perform a rich program of 19th and 20th century works on an eight-city tour of the Midwest and California, January 29 through February 12, 2011. The tour takes the acclaimed San Francisco ensemble to Cleveland and Granville, OH, Ann Arbor, MI, Evanston, IL and the California cities of San Diego, Santa Monica, Santa Rosa and Davis.

Salerno-Sonnenberg, the renowned violinist who joined the conductor-less New Century Chamber Orchestra in 2008, will lead the ensemble in performances of Bartók’s Romanian Folk Dances and Astor Piazzolla’s Four Seasons of Buenos Aires – both featured on the 2009 CD Together, the orchestra’s first recording with its illustrious music director and concertmaster. The tour repertoire also includes Tchaikovsky’s Serenade for Strings in C Major, Opus 48, and Hugo Wolf’s Italian Serenade, arranged by Lucas Drew.

“I could not be happier or prouder to take my own orchestra on tour,” says Salerno-Sonnenberg. “It’s time for the rest of the country to experience what the Bay Area already knows….that New Century is simply …the best.”

Salerno-Sonnenberg is the featured soloist in the Piazzolla piece, which she “played with ferocious beauty,” wrote San Francisco Chronicle Music Critic Joshua Kosman in a review of the New Century’s live performance of Four Seasons of Buenos Aires.

The same cohesiveness and vitality can be heard on the orchestra’s recording, LIVE: Barber, Strauss, Mahler, released in November on the Salerno-Sonnenberg’s NSS Music label. It includes Strauss’ Metamorphosen, Barber’s Adagio for Strings and Mahler’s Adagietto from Symphony No. 5, recorded live in concert in concert in 2009 and 2010.

Famed for the passion, depth and adventurousness of her music-making, Salerno-Sonnenberg has raised the profile of the New Century Chamber Orchestra, a cooperative ensemble composed of prime musicians from the Bay Area and across the United States and Europe. Founded in 1992 by Stuart Canin — the former concertmaster of the San Francisco Symphony and Opera and current concertmaster of Los Angeles Opera – the orchestra is noted for its vital performances and innovative programming. In addition to performing classic pieces of the chamber orchestra repertoire, New Century commissions new works, re-introduces rarely heard gems and brings jazz and rock pieces into a chamber music setting.

The brilliant genre-crossing violinist Mark O’Connor is the orchestra’s 2010-2011 Featured Composer. Soloing with the ensemble on a November program featuring three of his compositions, O’Connor returns to San Francisco in May, 2011 for the world premiere of a work NewCentury commissioned from him. In 2009, the orchestra Century commissioned Clarice Assad’s Impressions, which it recorded with Salerno-Sonnenberg on Together, along with the Bartók and Piazzolla pieces they’re playing on the forthcoming tour.

“There aren’t many recordings of Bartok’s Romanian Folk Dances in the string orchestra version,” Salerno-Sonnenberg told writer James Bash of The Gathering Note. I’ve wanted to do this piece with my orchestra and put our own in spin on it. I changed the arrangement somewhat so that I could spread the solos around the orchestra. I think that this piece fits perfectly with the Piazzolla, which is so wild.” 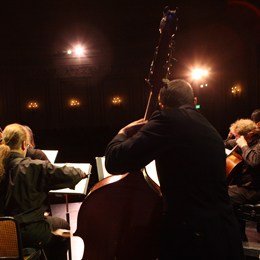