For a wine event, it was quite the rock ‘n roll scene at Fort Mason here in San Francisco over the weekend. While some did line-up for the Matt Damon/Kate Winslet film Contagion casting call just around the corner, most — some 8,000 from what we’ve been told! — came out in force to taste some of the best Zinfandel wine in the land. That of course would be ZAP 2011, which is celebrating 20 years of “Zinspiration.”

But what would a wine event be without a splash of stiletto?

Nadia G, host of the Bitchin’ Kitchen television show and the “Julia Child of the net generation,” cut the ribbon and got the party started.

“One of the things that I love the most about Zinfandel is that’s it’s not pretentious,” she says.

Stark Insider was there to talk with Montreal’s Nadia Giosia about bringing her show to the U.S. on the Cooking Channel (the first to transition from the Web to prime time TV), her favorite food pairings, and, of course, her love for shoes, shoes, and… shoes. The interview is not without an interruption or two. A leather jacket, blonde hair and even a “bitchin'” ring sometimes does help draw a crowd. Seems like her popularity and appeal are universal.

True SF foodies may want to close their ears when she talks about, (gasp) poutine. The famous Canadian import and “hot delicious mess” consists of french fries, gravy and … well, we’ll leave the rest for Nadia to describe. 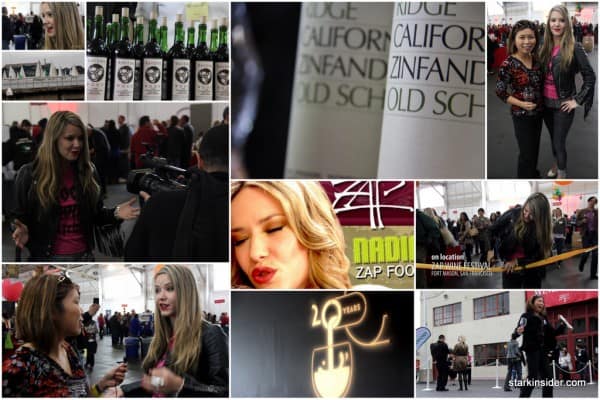