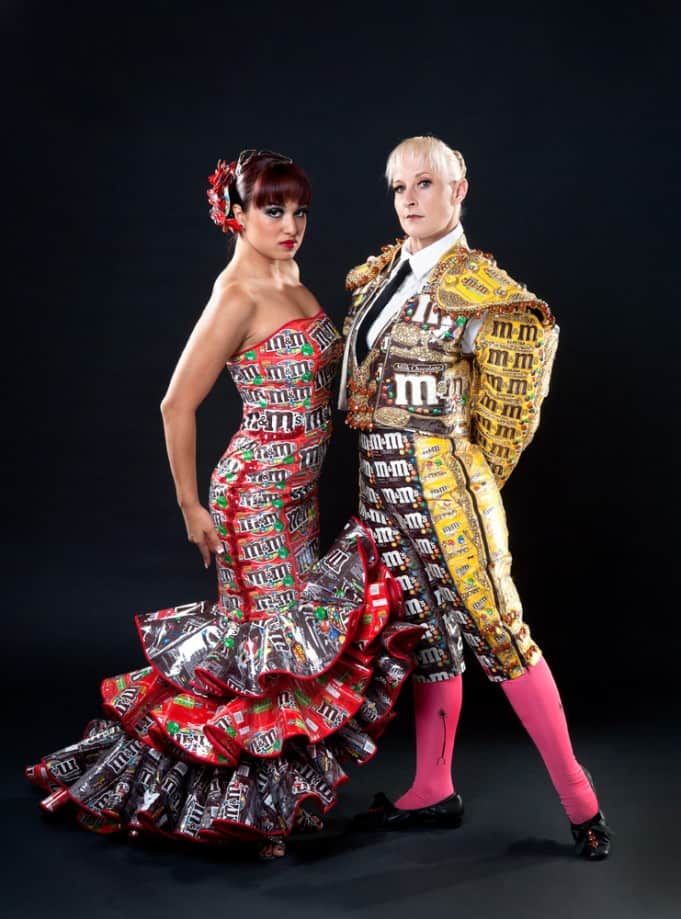 What happens to your packaging after you’ve consumed what is inside? Is it your property or does it still belong to the company?

These are just some of the thoughts behind Montalvo’s new exhibition, Cease & Desist, which opens on January 28 in the Project Space Gallery.

As a component of Montalvo’s 18-month thematic program Natural and Creative Capital, which addresses the sustainability of our natural and cultural environments, Cease & Desist features works by Los Angeles based artist Carrie Ungerman and San Jose, Calif., based artist Charlotte Kruk, as well as an art-making space for the public, and will be on view until April 17. A free opening reception will be held at 7 p.m. on Friday, January 28.

The inspiration behind the title of this exhibition comes directly from Kruk’s interaction with Mars, Inc., the company that owns candy such as M&Ms and Snickers. When the company learned of Kruk’s creations – dresses and matador outfits made entirely of candy wrappers bearing its candy’s names – Mars sent Kruk a “cease and desist” letter, notifying her she was not allowed to continue producing these works of art.

Kruk’s traditional Spanish matador costumes made from candy wrappers celebrate the public’s insatiable sweet tooth and defies the power of the large candy corporation. Many works of art have been created from found objects by masters of modern art such as Marcel Duchamp, Pablo Picasso and Robert Rauschenberg, but what happens when art objects include the repurposed trademark of a major corporation? As a society, we are encouraged to reduce, reuse, and recycle, however the laws around brand name usage leave the parameters around the reuse of product packaging unclear.

Cease & Desist also includes a site-specific installation by Ungerman that examines consumption behavior around drinking water. Ungerman’slarge-scale installations, sculpture and drawings use common materials ranging from the natural to the manufactured including thread, discarded water bottles and adhesive vinyl tape. The artist collects, amasses and manipulates these materials with a focus on placement and toward the material itself. These culturally encoded materials are presented and pared down to reveal their inherent qualities of color, texture and form. Working with a preliminary visual “plan” and using elements that have been collected or made in the studio, Ungerman’s work will be created on-site at the Project Space Gallery, as she takes into consideration the architecture and balancing specificity and fluidity. The works, ultimately ephemeral, become physical evidence of a past or remembered experience, place or action.

The final component of this exhibition belongs to the public. Visitors are invited to participate in the act of turning trash into objects of delight, either to leave behind for the next visitor or to be taken away to display in other venues. Supplies for the participatory component of this exhibition will be made available by Resource Area for Teaching (RAFT) of San Joseand Scrounger’s Center for Reusable Art Parts (SCRAP) of San Francisco.