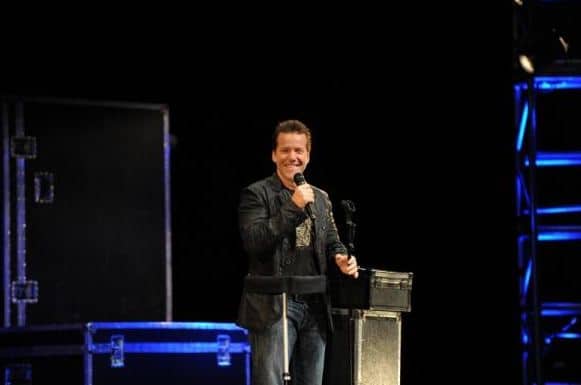 Jeff Dunham, called “the most successful comedian working in America,” by New York Times Magazine is coming to the HP Pavilion at San Jose next month.

Already a multi-million DVD sales phenomenon and the top box office earner as a live comedian for 2008 and 2009 in North America as well as worldwide last year according to Pollstar, he now confidently adds best-selling author to his many achievements following the book’s publication by Dutton on November 2nd.

Dunham’s latest triumph caps a year that has seen him barnstorm South Africa on his debut arena tour and visit Europe for the second time, release his fourth DVD (“The Jeff Dunham Show”) that immediately soared to platinum sales status, and make his film debut in “Dinner For Schmucks,” in which he introduced his first female character, Diane. She is now featured in his shows, which continue to pack major venues across North American on his “Identity Crisis” tour. Since rolling out his line of merchandise into stores last year, Dunham and his crew of comedic sidekicks are also top sellers in major retail chains across the nation.

“All By My Selves” reveals how Dunham rose from entertaining his elementary school classmates with his puppet-based comedy and performing at parties as a youth to becoming an international comedy phenomenon. Among such insights is how he learned the power of television and mastered the medium as a teenager doing commercials for a car dealer. This later served him well when he self-financed his first Comedy Central one-hour special and went on to set a number of ratings records for the cable channel with subsequent specials. Clips from those specials spread Dunham’s popularity worldwide, earning him some half a billion global views on YouTube. The book is written with candor and warmth about being an adopted child whose parents supported his unique childhood hobby that became a career, his marriage and divorce, and raising three daughters, savoring the joys and successes as well as learning life’s lessons and noting his regrets.

Also available as an audio book narrated by its author with commentary from the entire gang, via Image Entertainment, “All By Selves” adds yet another chapter to Dunham’s stature as a multimedia master. The book is currently available for download on iTunes and Audible.com and will be in stores on January 11th.

Dunham’s career all began with his first public performances for a mere $5 a show as a fourth-grader in his Dallas, TX hometown, followed by years of intensive touring on the comedy club circuit from his college years into adulthood (hilariously recounted in “All By My Selves”) at every show. Dunham built his loyal audience by gathering fan contacts from his earliest days in the comedy clubs, and was an early adopter of using the Internet and digital communication tools for promotion and marketing. His Facebook page was recently listed as the fourth “Most Explosive” page on the site by AllFacebook.com, a popular industry blog, after he added nearly 300,000 fans in one week. He currently boasts more than 4 million Facebook fans and is the #1 comedian on MySpace. When his iPhone app released last July, it was so immediately popular that it hit Apple’s Top 10 apps the first day it was available.

Dunham has indelibly etched the vivid and believable personalities of his comedic crew like Walter the Grumpy Retiree, Achmed the Dead Terrorist, the beer-fueled redneck Bubba J and the manic purple creature Peanut into the consciousness of the nation and comedy fans around the globe. And their trademark phrases like “Silence! I keel you!” (Achmed) and “On a steek!” (José Jalepeño) have become integrated into the modern lexicon.