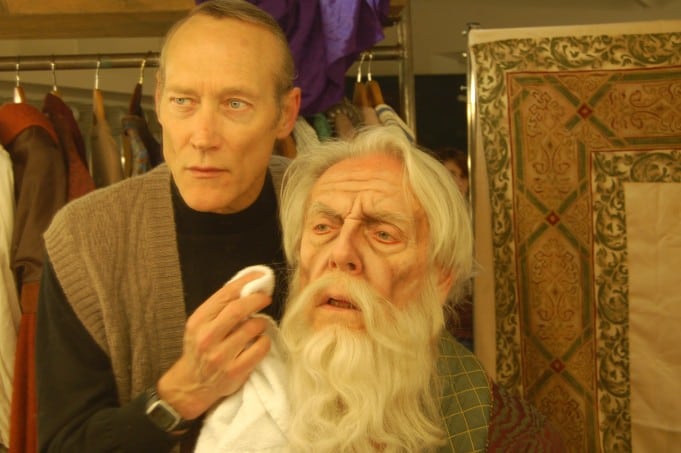 The witty, compelling drama The Dresser examines the backstage relationship between the tyrannical Shakespearean actor “Sir” who is trying to keep his company together during difficult times and his devoted, fussbudget dresser Norman. The result is one of the most acclaimed dramas of modern theatre.

It’s 1942 in Britain and the smell of death is in the air. The sirens howl, signaling another air raid, but inside the crumbling walls of a struggling theatre in the provinces, Sir prepares to give his 227th performance as King Lear. Norman is barely able to take care of himself but faithfully assists Sir in near feudal servitude, massaging his ego, pampering his intellect and even creating sound effects for the Shakespearean production by Sir’s struggling troupe. This poignant tribute to theatre, friendship and the human spirit in the face of great strife—be it war or one’s own debilitating mortality—proves that “the show must go on.”

“This play, which celebrates the power and love of the theater to sustain us, speaks very deeply to me,” states Director Rick Lombardo. “In its celebration of all things theatrical, it also celebrates the power of tradition, work and purpose to give meaning to whatever we do in life.”

Ronald Harwood based the play on his experiences as dresser for distinguished English Shakespearean actor-manager Sir Donald Wolfit, the prototype for the play’s “Sir.” The Dresser was first presented in Manchester, England, in 1980. It opened on Broadway the next year and was nominated for the 1982 Tony Award for Best Play.

Rick Lombardo is in his third season as Artistic Director of San Jose Rep. He was previously the Artistic Director for 13 years at the award-winning New Repertory Theatre, the leading mid-size resident theatre in the greater Boston area. In 2009, he was awarded the Norton Prize for Sustained Excellence from the Boston Theatre Critics Association for his work at New Rep. He has also been the recipient of four individual Elliot Norton Awards and is a nine-time winner of the “IRNE” award for his productions of The Clean House, Sweeney Todd, Rosencrantz and Guildenstern are Dead, A Streetcar Named Desire, Ragtime, Waiting for Godot and The Wier. His world premiere of According to Tip has transferred for an extended run to Boston’s theatre district. His production of Bill W and Dr. Bob enjoyed an extended run off-Broadway in 2006.

“I’m enormously excited to be working on this play with two of the Bay Area’s finest and most beloved actors, Ken Ruta and James Carpenter, in these two iconic roles,” adds Lombardo. “I can’t think of another stage actor in the country better suited to bringing to life the mercurial, gifted and fading actor ‘Sir’ as Ken Ruta, whose decades-long career on stage begins with Tyrone Guthrie, and includes several performances of his own as King Lear. I expect the chemistry between Ken and Jim to be electric.”

Ken Ruta (Sir) appeared in San Jose Rep productions of Dr. Jekyll and Mr. Hyde, Las Meninas, The Underpants, Amy’s View and Later Life. An original company member of San Francisco’s American Conservatory Theatre (some 60 productions as actor/director), Minneapolis’ Guthrie Theater (over 40 productions as actor/director/associate artistic director) and Cincinnati’s Playhouse in the Park, he is an associate artist of San Diego’s Old Globe Theatre and has enjoyed a quarter century association with the Arizona Theatre Company. As well as extensive credits with the Lyric Opera of Chicago and the Minnesota Orchestra, he appeared in the Broadway productions of Inherit the Wind, Separate Tables, Duel of Angels, Ross, The Three Sisters and The Elephant Man.

Interview with star of The Dresser, James Carpenter

Penned by Robert Harwood and directed by the Rep’s Artistic Director Rick Lombardo, The Dresser runs from January 27-February 20, 2011 at San Jose Repertory Theatre, 101 Paseo de San Antonio in downtown San Jose. Pay What You Will Night is Thursday, January 27 at 8 p.m. Press Opening Night is Wednesday, February 2 at 8 p.m.