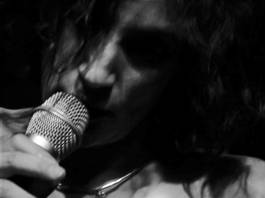 Hailed by the New York Times as “a stylistic rebuke to commercial cinema norms,” Ne change rein presents an assertively slow, intimate portrait of the act of music creation, featuring Costa’s sparse editing style and an emphasis on shadow over light.

If you’ve never heard of Balibar it doesn’t matter, this is no traditional music film. Stripping out everything that isn’t essential, Ne change rien is a narcotic, unblinking portrait of the artistic process. (2009, 98 min, 35mm)

Ne change rien is presented as part of YBCA’s “Reflect” Big Idea, in which they investigate the personal – in this case by documenting the long, slow and often repetitive artistic process. By eliminating all of the elements of a typical music documentary (including most camera movement), the director somehow magically succeeds in capturing human consciousness on film.