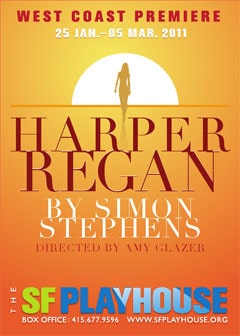 On a startlingly bright autumn night Harper Regan walked away from her home and her husband and her daughter and she kept walking. She told nobody that she was going. She told nobody where she was going. She put everything she ever built at risk. For two lost days and nights, until it looked as though her entire life might unravel, she didn’t turn back.

From Uxbridge to Stockport to Manchester and back again, Simon Stephens’ new play navigates the U.K., exploring family, love and delusion; and how to live in a godless universe.

Harper Regan had its world premiere at the National Theatre in London in 2008, opened in Tel Aviv in 2009 and had its US premiere in 2009 at Chicago’s Steep Theatre.

Simon Stephens’ (Playwright) plays include Bluebird, Herons (nomination for Olivier Award for most promising playwright, 2001), Port (Pearson Award for Best Play, 2001), One Minute, Christmas, Country Music, On the Shore of the Wide World (Olivier Award for Best New Play) and Motortown (German Critics in Theater Heute’s annual poll voted Best Foreign Playwright of the Year, 2007), Pornography, Harper Regan, Seawall, Heaven, Punk Rock, The Trial of Ubu, Marine Parade, A Thousand Stars Explode in the Sky, and T5. Simon also writes for radio, plays include Five Letters Home to Elizabeth (2001) and Digging (2003), both BBC Radio4. Simon’s screenwriting includes an adaptation of Motortown for Film Four; a two-part serial Dive (with Dominic Savage) for Granada/BBC (2009) and a short film adaptation of Pornography (2009). Currently Simon is under commission to the Royal Court Theatre, the Royal National Theatre and the Theater and Philharmonie, Essen. He is also developing original television work for Talkback Thames and Touchpaper TV.

Amy Glazer (Director and SF Playhouse Associate Artistic Director) has directed numerous world, American and West Coast premieres, most recently, Animals Out of Paper, Shining City and The Scene (SF Playhouse), The Model Apartment (TJT). For Magic Theatre, where Glazer was an associate artist for many years, her work included The God Of Hell, The Crowd You’re In With, The Sweetest Swing in Baseball, Blue Surge and The American in Me, Drifting Elegant, Tape, and Wyoming. She has also directedat Marin Theater Company, Eureka Theatre, TheatreWorks, Glazer’s short film, Ball Lightning, premiered at the Locarno International Film Festival, and her feature film, Drifting Elegant, premiered at the Mill Valley Film Festival. Her latest feature film, Seducing Charlie Barker, adapted from Theresa Rebeck’s The Scene is now showing in film festivals throughout the country. Amy Glazer is a theatre and film professor at San Jose State University.