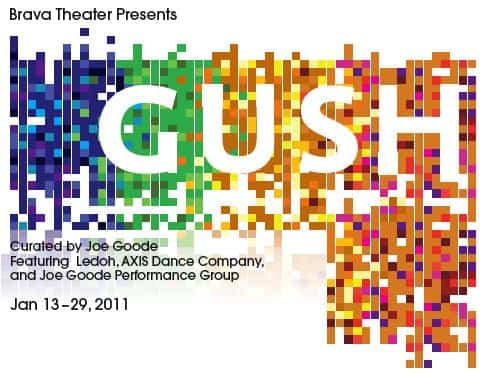 Gush, Brava Theater’s inaugural dance-theater series, celebrates theatrical impulse and the desire to feel and express something in a big way. Curated by internationally known and acclaimed choreographer Joe Goode, it brings together artists and work that affect how we see the world from January 13 – January 29th, 2011. The three weekend series features work by the celebrated Joe Goode Performance Group in performance with groundbreaking Bay Area groups, AXIS Dance Company and Ledoh. A bold contemporary dance series, Gush graces the stages of Brava Theater in the San Francisco’s historic Mission District.

Gush celebrates the theatrical impulse—the desire to express deeper connections between performer and audience member. Challenging perceptions of the body with movement-based theater, Gush uses contemporary dance to depict social and political commentary created for the stage. From Joe Goode’s signature 29 Effeminate Gestures exploring the physicality of gender, to award winning AXIS Dance Company’s to the beauty that was mine, through the middle, without stopping evaluating physical difference and ability, to Ledoh’s cultural confrontation Color Me America confronting culture through Butoh movement, Gush brings together a breath and depth of theatrical bodies in motion. Each piece brings to the stage cultural or political commentary that challenges viewers to deviate from their social script.

Joe Goode formed Joe Goode Performance Group in 1986. The company tours performances in almost every region of the globe, while attracting students from around the world for Goode’s workshops in “felt performance.” Joe Goode Performance Group promotes understanding, compassion and tolerance among people through the innovative use of dance and theater, as interpreted by the artistic vision and work of Joe Goode. His trademark piece 29 Effeminate Gestures (1987), set to music by Erik Ian Walker, challenges masculine stereotypes through solo performance. The cutting edge masterpiece originated in San Francisco before becoming a seminal work of socially relevant contemporary dance.

He received the John Simon Guggenheim and United States Artists Glover Fellowships in 2007 and 2008, respectively. Now a faculty member of the University of California, Berkeley in the department of Theater, Dance and Performance Studies, Goode and his work have been recognized with awards for excellence by the American Council on the Arts, the New York Dance and Performance Award (Bessie), and Isadora Duncan Dance Awards (Izzies). The company’s 2009 premiere of Traveling Light at the San Francisco Old Mint was remounted by popular demand for an extended run in 2010. While Joe Goode Performance Group’s work stands on its own, Gush strengthens their artistic vision of providing theater-movement based performances that challenge social narratives by featuring incomparable AXIS Dance Company and Ledoh.

AXIS Dance Company, one of the world’s most innovative ensembles of performers with and without disabilities, will change the way you think about dance and the possibilities of the human body forever. Founded in 1987, AXIS has become a jewel of contemporary dance and disability culture. AXIS has paved the way for a powerful contemporary dance form – physically integrated dance- performing in over sixty cities nationwide, as well as in Europe and Siberia. Under the Artistic Direction of Judith Smith, AXIS’ own choreographers have created over sixty repertory works, two evening-length works and two works for young audiences. The pieces have earned the company numerous Izzies and have been performed throughout the United States and in Europe, earning international praise for the company’s high artistic and educational standards, and groundbreaking movement vocabulary.

Ledoh and the performance collective Salt Farm make groundbreaking multi-media work that integrates choreography with original electronic scores, mobile set designs, and video projection. Ledoh continues this standard of innovative explorations of movement, the body and politics through his Butoh-based work. Ledoh founded Salt Farm in 1998, a performance collective based in San Francisco. His work is rooted in the creative responses to the fundamental tensions between technology and the survival of organic life force, tensions which now affect each one of us upon this globe. The company has a holistic community approach to theater where performers participate in all aspects of theatrical production, an approach that works within Butoh’s core of dissolving the boundary between life and art.

Ledoh’s Color Me America was born out of a Creative Capital project titled “Signature Required: Life During Wartime” as a collaboration with video artist Perry Hallinan. Color Me America originally premiered as part of the ODC’s For the Record: Dancers Debate the Body Politic festival at San Francisco’s Project Artaud Theater in April 2008. Video artist Perry Hallinan’s passion lies in creating visual imagery and improving his process to find new ways to develop imagery through the combination of cutting-edge technology with organic/analog methods. Together, this piece continues to challenge disciplinary lines while maintaining roots in artistic political questioning. San Francisco Dance Correspondent Rachel Howard on the Ledoh notes “he channels Butoh’s essence without ever falling into its clichés.”[1]

Gush brings together three performance groups in Brava Theater’s historic Mission-District space. Brava Theater Artistic Director Raelle Myrick-Hodges remarks “To have Mr. Goode introduce dance into our season programming at Brava is an honor and a treat. He has been working with theaters and theater artists extensively for decades. It is my pleasure to have him and the choreographers he champions gracing the Brava stage in January.”

Brava Theater continues a season of collaboration, first with Theater Offensive’s nationally curated show Come As You Are to celebrate queer sex on the 40th anniversary of Stonewall, and then with African-American Shakespeare Company on Colin Teevan’s IPH… new take on Greek tragedy. Most recently, Brava produced Joel Israel’s Reluctant, directed by Meiyin Wang, to critical acclaim. Ms. Myrick-Hodges continues, “This is a new and exciting venture for us – how can collaboration happen with different mediums without inter-mixing the nature of the work? This is what we have set out to discover on this Gush journey.”

This collaborative journey presenting the socially engaged and meaningful artistic work of groups from the Bay Area dance scene is fundamental to the growth of a thriving performing arts scene in San Francisco. With the work of local actors, dancers, writers, choreographers, and all other artistic cultural workers, Brava with Joe Goode are actively creating spaces for regional artists to produce large scale performance. Social and political commentary on stage, Brava Theater and Joe Goode bring you Gush to challenge both viewers and performers to deviate from their social scripts.