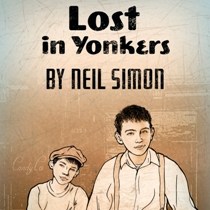 The Jewish Theatre San Francisco in association with The Friend Center for the Arts at the Jewish Community Center of San Francisco (JCCSF) announced that they will present Neil Simon’s Pulitzer Prize-winning play, Lost in Yonkers for a limited engagement at Kanbar Hall, JCCSF, January 6 – 16, 2011.

Lost in Yonkers is a coming of age tale that focuses on brothers Arty and Jay, left in the care of their Grandma Kurnitz and Aunt Bella in Yonkers, New York. Their sweet but simpleminded aunt and gangster uncle add to the mix in this portrait of a dysfunctional Jewish family in the 1940s.

The play opened on Broadway in 1991, and won the Tony for Best Play, the Pulitzer Prize for Best Drama, and the Drama Desk Award for Best New Play. The original cast included Irene Worth as Grandma, Mercedes Ruehl as Bella, and Kevin Spacey as Louie. All three won Tony Awards for their performances. Simon adapted his play for a 1993 feature film directed by Martha Coolidge. Worth and Ruehl reprised their stage roles, and RichardDreyfuss was cast as Louie.

Like many of Simon’s plays, Lost in Yonkers draws on his experiences growing up in New York City, but it is not considered as autobiographical as his other works. Although it is set during World War II—a setting that plays an important part in the narrative—Simon published the play as America was entering the Gulf War in the Middle East. Consequently, the play’s main themes—including survival, the importance of family, and acceptance—remain timely.

For this production, The Jewish Theatre’s cofounder Naomi Newman will appear as Grandma Kurnitz, with Deb Fink as Bella, Soren Oliver as Louie, Greg Alexander as Eddie, Carolyn Howarth as Gert, Zachary Freier Harrison as Jay and Noah Silverman St. John as Arty.

Nancy Carlin has directed for the S. F. Playhouse, Foothill Theatre Company, B St. Theatre, Aurora Theatre, Center Rep, Lake Tahoe Shakespeare Festival, PlayGround, and A.C.T.’s MFA program. She is an associate artist of the California Shakespeare Theater, a PlayGround company member and a former company member of the American Conservatory Theater. She is the writer of a new musical, Max Understood, which was developed at the O’Neill National Music Theater Conference and was an official selection of the New York Musical Theater Festival last year. She holds a BA in comparative literature from Brown University and an MFA in acting from A.C.T. She is a member of SDC, AEA, and the Dramatists Guild.

The Jewish Theatre San Francisco was founded in 1978 by Corey Fischer, Albert Greenberg and Naomi Newman. The company creates and presents plays inspired by the Jewish experience that intend to make the culture resonant and meaningful to the diverse communities of the Bay Area.

Saturday, January 8 at 8 pm, with previews on Thursday and Friday, January 6 and 7 at 8 pm.