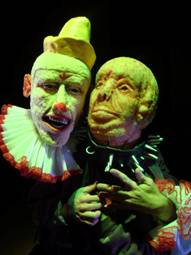 Featuring the Lone Wolf Tribe’s signature blend of life-sized puppets and exceptional performers, Kevin Augustine’s Hobo Grunt Cycle challenges the insanity of warfare with the company’s unique unconventional style. Looking at the legacy of veterans’ trauma through the experience of a severely injured fight ring pit bull, a tramp clown poignantly attempts to heal the scars of violence by nursing his pet dog back to health.

Hobo Grunt Cycle is performed predominantly in silence (a first for Augustine as a playwright) in keeping with the tramp clown’s pantomime tradition, as well further links between dogs and soldiers: both essentially being silent characters primarily doing what they are told. One soldier character finally breaks this rule, in keeping historically with the “Winter Soldier” testimonies of the Vietnam War (the “American War” to the Vietnamese); this being the first time veterans spoke out about their war experiences.

Developed by Lone Wolf Tribe, a New York based puppet theatre ensemble creating challenging multidisciplinary work for over ten years, Hobo Grunt Cycle toured to theatre festivals in Holland and Brazil in the summer of 2009.

Lone Wolf Tribe’s last show, Bride, won an UNIMA Award for Excellence in Puppet Theatre (instituted by Jim Henson) and was named a TOP 10 SHOW of 2008 by Time Out New York. Time Out New York’s theatre editor, David Cote, praised, “In the church of puppet artistry, Augustine is divine.”

Featuring life-sized puppets and performers, Kevin Augustine’s drama challenges the insanity of warfare and looks at the legacy of veterans’ trauma.