While we were winding along Hwy 120, I admired the dramatic rock formations and majestic redwood trees. I couldn’t think of two more opposing places than Las Vegas, where I just returned from a three day trip, and Yosemite, where I planned to spend the weekend.

I had been invited to the historic Ahwahnee Hotel to experience an 84 year-old Christmas tradition: the famous Bracebridge Dinner. The annual ritual is as old as the hotel itself, commencing the first year the hotel opened in 1927.

Donald Tresidder, the first president of the Yosemite Park and Curry Company had visions of a Yuletide celebratory feast in the hotel’s Dining Room and hired Garnet Holme, a California pageant director to pull off such a master plan.

I obviously wasn’t there for this first celebration modeled loosely after Washington Irving’s sketchbook “A Christmas at Bracebridge Hall,” but I could imagine it was probably quite a grand affair full of comical moments, either planned or happenstance. At the time, I fathom no one would expect this event to become a tradition that would flourish throughout the Ahwahnee hotel’s entire existence. Especially after the unfortunate death of Holme just two year’s after the inception of the Bracebridge dinner.

Fortunately, Tresidder tapped the shoulder of a Bracebridge cast member, Ansel Adams, who played the part of The Lord of Misrule to rework the annual event. Ansel Adams at the time was already on his way to becoming one of the world’s finest photographers, most well-known for his photos of Yosemite. Just as his photos are a window into the natural wonders of Yosemite, it is his original script of the “new” Bracebridge Dinner that has remained largely unaltered since its inaugural performance in 1929.

The pre-dinner festivities are as much of an experience as the dinner itself. Arrive early, dressed in your best and get the moment captured in a holiday portrait taken by Nancy Robbins. This is a tradition included in the “Bracebridge Package.” After the portraits session, I joined the rest of my dinner guests in the Great Lounge for an hour of Christmas carols.

Then, at the stroke of 6 pm, the trumpets sound!

Each year, The Dinner has grown more elaborate. As I was guided into the grand dining hall by a member of the Bracebridge cast, I relished in the visual opulence of the set. The finely preserved parchment paper stain glass windows which hung high just below the ceiling and the grand stained glass piece that adorned the wall behind The Squire’s Head Table. Although it was a sold out evening with 300 guests, it still felt intimate. Many of the lavishly dressed gentlemen and women were returning patrons, the Bracebridge Dinner is as much a family tradition as it is a tradition at Ahwahnee Hotel.

It was Adams who wanted to maintain the intimate and theatrical nature of the Bracebridge Dinner, and restrict the use of any electronic devices during dinner — a rule still upheld to this day. So alas, you will not see any foodie shots of the fabulous seven course dinner or the intricate “stained glass” art, but hopefully my descriptions will entice you.

Because of the loyal following for the last 84 years, the Bracebridge Dinner is now a 8 evening marathon, instead of just a one evening event. The demand grew so that a second evening had to be added in 1956 and by 2002, the seven course four hour Christmas experience expanded to the current 8 evening Bracebridge Dinner “season.”

The current version of the Bracebridge Dinner is under the direction of Andrea Fulton who has been involved with this annual tradition in some manner for the past 61 years. Since her direction in 1978 after Ansel Adams’ retirement, she has expanded the original vision of The Dinner and stars in it as Augusta Billingsly, housekeeper of Bracebridge Manor.

The entire theatrical production consists of about 30 cast members who live in Yosemite for the entire run of the production and have their dinner in parallel with the dinners in the dining hall just above the grand dining room. There is also the Andrea Fulton Chorale of 40 members. It is a grand display of music, poetry and even, comedy.

One of the highlights of the presentation is that even with all its visual opulence, the Bracebridge Dinner still maintains a boisterous sense of humor which engages the entire room. Most humorous was the tuba “musical chairs” act which was not only loads of fun, but also a tremendous physical feat by Johannes Mager, as Chauncey, The Lord of Misrule. Another memorable scene involved the confession of sins where the old “cream pie in the face trick” leads to some surprises and of course, scandalous confessions. 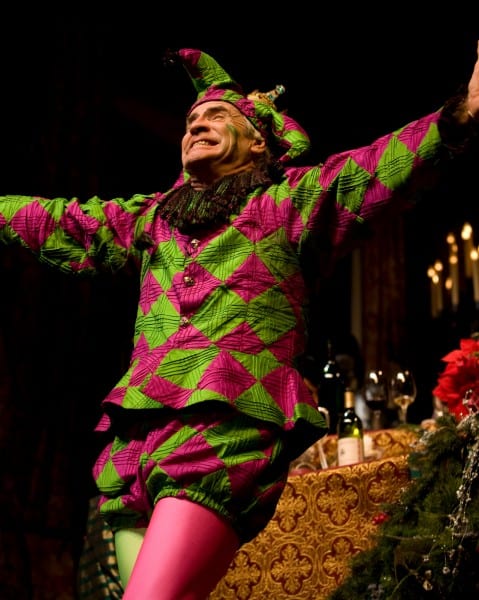 However, this is only half the story of what it takes to pull off the Bracebridge Dinner. Behind the scenes, in one of the nation’s largest kitchens, Executive Chef Percy S. Whatley and his team of over 20 cooks create with incredible precision the 2,100 dishes that must effortlessly flow from a door on the right of the dining hall each time the Lord Merrick, Squire of Bracebridge Hall announces the next course. Working in teams, they are able to plate an entire course in under 10 minutes. Pretty impressive.

So what was on the menu this year?

This was one of my favorite dishes of the evening. I thought the chevre cheesecake was fork licking good, however the best was when this chevre cheesecake was smeared on a piece of crispy root vegetable. The combination was addictive, like a luxurious interpretation of nacho and cheese…but or so much more crave-liciousness.

What can I say. Warm soup on a cool day in Yosemite surrounded by the earthy smells of giant redwoods…it doesn’t get any better than this. The pumpernickel croutons were a nice, unique touch and transformed something that so often is an afterthought one of the stars of the dish.

After a hot soup dish, this course was a nice complement. The citrus-farm egg vinaigrette injected wonderful character to the seafood combination of smoked salmon and crab.

The ingredients of this salad were crisp and fresh. Blood oranges are all the rage right now so I was excited to see it used as a vinaigrette. Unfortunately, my salad didn’t come with very much vinaigrette. Usually, my issue is too much salad dressing. I do not like my salads drenched in dressing. However, in this case, there was so little I had to sneak over to Clint and swipe some of his vinaigrette and noticed he had very little as well. Minor adjustment during plating would have remedied this.

The funny thing about this dish was just prior to it being served, a large stuffed peacock is wheeled out in a grand procession. One of the most impressive visual elements of the Bracebridge dinner was when the feathers of the peacock fan out. It was the most majestic sight. At that moment, one of the other guests at the table leaned forward to let me know that we were not in fact having peacock in the pie. That was just the name of the course, it would really be California Pheasant.

I was reminded of this fact in case I would be troubled with the notion of eating peacock. Having read Michael Pollan’s “Omnivore’s Dilemma” and his adventures with hunting and killing a pig, I was prepared, should the occasion warrant it, staring at the animal form of a piece of meat I would eat. If one is to eat meat, one should own up to it.

Tonight would not be my opportunity.

The pheasant was melt in your mouth tender and the crust, flaky. By this time, it dawned on me that to last through seven courses, I really need to pace myself. No matter how delicious the food was and how amusing the entertainment was.

During this course, I was given a tour of the kitchen and was amazed at the number of plates and teams assembled on the other side of the dining hall wall. All the ingredients for the 8 Bracebridge Dinners are procured at the start of the season. This year, the dinner dates are, December 13, 14, 16, 18, 20, 22, 24, and 25.

Executive Chef Percy S. Whatley shared with me that about one ton of beef tenderloin was procured for this season.

For steak lovers, make sure to save some room for this course. The beef was tender and comforting when paired with the cauliflower grain and swiss chard.

The final course pays tribute to English tradition, plum pudding and Wassail. I have never tried Wassail until this Bracebridge Dinner. Wassail is a hot drink made of wine, beer, or cider, spices, sugar and baked apples. Very English. The most comparable experience would be sipping on port after a meal.

By the end of the evening, I knew I experience the grandest of feasts as guest of Lord Merrick, Squire of Bracebridge Hall (Michael McCarty) with 300 of my closest friends. We had laughed together, toasted together and shared in the Bracebridge experience, together.

For more information and reservations at the Bracebridge Dinner visit: www.bracebridgedinner.com