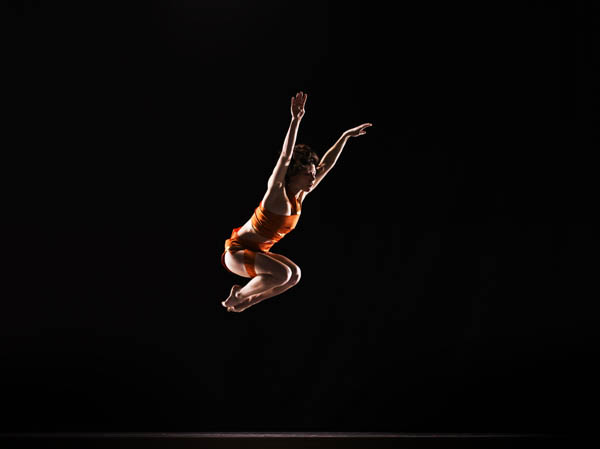 Hot on the heels of successful appearances in Germany, and inspired in particular by an original art gallery performance in Dusseldorf, the vibrant contemporary dance company, Liss Fain Dance presents The False and True Are One at Z Space, Theater Artaud, on December 3 and 4. Central to the performance will be the participation of Word for Word actress Jeri Lynn Cohen, enacting short stories by Lydia Davis.

For this performance installation, choreographer Liss Fain is using the 60-foot depth of the stage at Theater Artaud creating 4 distinct areas in which the dance occurs, within Matthew Antaky’s architecturally designed environment. Jeri Lynn Cohen, in the center of the dance spaces, performs the stories of Lydia Davis while the audience walks around these areas of dance.

Although the piece is set, the route he or she takes through the set determines an audience member’s perspective of The False and True Are One. The performance interweaves the internal, descriptive, and droll writing of Davis with Fain’s abstract, highly physical and emotionally powerful choreography. It is about seeing things from multiple angles, never absolutely knowing where the truth lies.

Liss Fain Dance was one of four American companies invited to participate in the Internationale Tanzmesse last August in Germany. While there, the company was sponsored by Amerika Haus to perform at the prestigious Beck & Eggeling Gallery prior to the other events.

“I knew the three gallery rooms we would be performing in were non-contiguous and differently shaped,” Fain stated. “There were no repetitions; each gallery had a complete performance, set to music by Dan Wool. My idea was that no one in the audience saw everything; whatever galleries you visited, in whatever order, became the performance you saw.”

Essentially False and True Are One deals with different perceptions of the same event. The random order in which the audience will see the dance will serve to heighten the ephemeral and arbitrary aspects of thought and perception.

“A choreographer who takes the chances…that matter” (Voice of Dance), Liss Fain creates abstract contemporary dance pieces expanding the performance parameters by presenting original works that integrate the ideas and designs of artists from other disciplines. Since founding her company in 1989, she has created more than 40 new works, and has collaborated with film-makers, visual designers, musicians and technologists on projects that have toured both nationally and internationally.

Since 2007, LFD has performed at festivals in Poland and Belarus and in St. Petersburg, Russia. In 2006 the company appeared daily at Southside Theater in Edinburgh during a three-week residency as part of the Edinburgh Festival Fringe. The company is committed to artistic cross-cultural exchanges through performances, workshops, and master classes that contribute to mutual understanding and respect between citizens from different countries and cultures. International appearances have been sponsored U.S. Embassies in host countries, the Open Look Festival, Trust for Mutual Understanding, USAI, Silesian Dance Festival, and International Dance Forum.

Liss Fain Dance presents ‘The False and True Are One’

Tickets ($12.50 – $25) for the two performances at Theater Artaud may be purchased online at www, or www.brownpapertickets.com. Theater Artaud is located at 450 Florida Street at 17th in San Francisco.