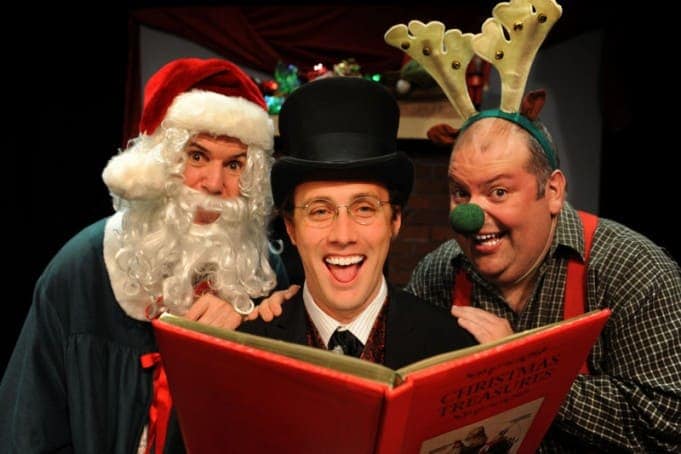 San Jose Stage is bringing back their popular production of Every Christmas Story Ever Told, a fond and furious look at the holiday classics and traditions we all remember — plus some we’d like to forget.

From a non-religious version of Silent Night to a non-copyrighted version of Rudolph, the Red-nosed Reindeer—renamed Gustav the Green-nosed Reingoat—as well as tributes to Frosty the Snowman, The Grinch and It’s A Wonderful Life, no pop culture holiday icon is spared in this whirlwind of holiday merriment.

Randall King, The Stage’s Artistic Director, will helm this production.

The story behind Every Christmas Story Ever Told changes as frequently as the script, which playwrights Michael Carleton, James FitzGerald and John K. Alvarez are constantly updating with fresh pop culture references.

“My interpretation is simple,” says Alvarez of the show’s creation. “It was all my idea.”

In Alvarez’s version of events, he shopped the idea for the show to various writer friends, and “all of them laughed at me, except for Michael and James.”

It was the summer of 2003, and all three men were working for Cape May Stage in New Jersey, where the show would premiere that year during the holiday season. Once they agreed on the idea, they repaired to a friend’s kitchen, cracked a beer and talked.

“By the end of the second beer, we had an outline of the play,” Alvarez says. “Basically, it’s about three guys doing A Christmas Carol when one actor confesses that he can’t do another version of this story again. From that point on, we spoof Christmas stories, traditions, carols, commercials, parades and TV specials.”

The three men responsible for Every Christmas Story Ever Told not only wrote the show but performed in its premiere at New Jersey’s Cape May Stage. At the time, Michael Carleton was the company’s artistic director; he has since moved on to serve as producing artistic director for the Baltimore Shakespeare Festival. 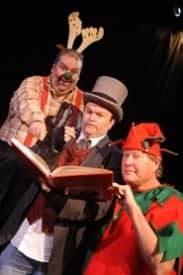 There is no performance on Thanksgiving (Thursday, Nov. 25).