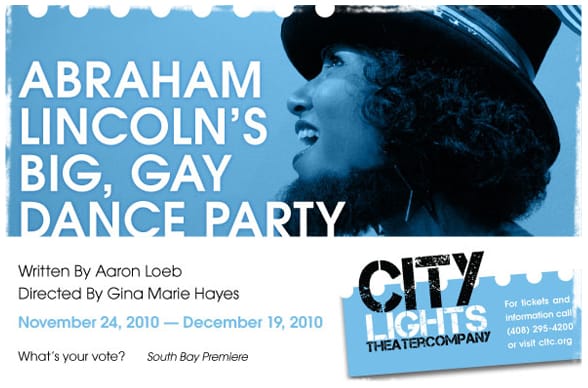 City Lights Theater Company has announced it will present the South Bay premiere of Abraham Lincoln’s Big Gay Dance Party. Following the successful run at the San Francisco Playhouse, the play was screened at the 2009 NY International Fringe Festival, where it played to sold out audiences and won top honors.

Now CLTC has brought this award-winning performance to the heart of San Jose.

Playwright Aaron Loeb has created a comedic masterpiece centered on the question: Was Abraham Lincoln gay? “Outed” by a school teacher during the Christmas pageant, our 16th president’s sexuality is put on trial, and the dance floor, to settle the debate once and for all.

The LGBT Resource Center at San Jose State University is a Non-Profit Partner and Sponsor for the show.

Director Aaron Loeb is the CEO of Planet Moon Studios, an independent developer of videogames. His thespian alter ego holds BFAs in Dramatic Writing and Dramatic Literature from New York University. He is a member of the Dramatists Guild and a Playwrights Foundation resident playwright. Even more accolades might be in his future, with nominations for a GLAAD Media Award and seven “Emerging Playwright” Awards from Playground. Loeb lives in Berkeley, CA with his wife Kathy and their daughter Talitha.

Back from the dead good ol’ Abe is played by every single cast member. Adding to the holiday fun, the audience will vote/choose the order of the Acts. 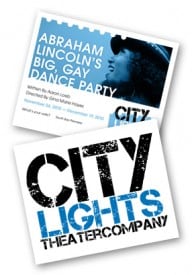