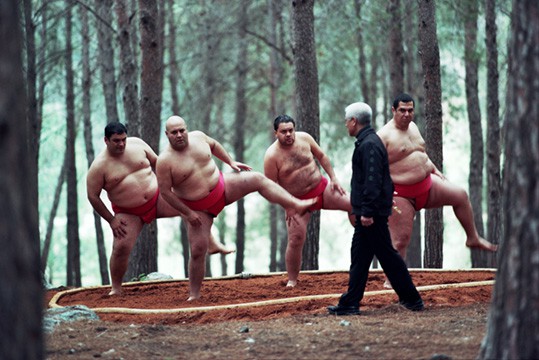 Three time world sumo champion “Byamba” will go to the mat with other large opponents as the live opening act before the screening of an Israeli Academy Award winning film, A Matter of Size. The sumo wrestlers will perform in Cupertino a week before they compete in the 2010 World Sumo Championships.

The movie and the sumo show will be the Opening Night Event of the 19th Annual Silicon Valley Jewish Film Festival, October 9 at 7 p.m. at the Visual and Performing Arts Center at DeAnza College.

A Matter of Size, a poignant comedy film, depicts overweight Israelis who quit dieting and decide that their best option is to become sumo wrestlers.

A trailer from the film and more information about the sumo wrestlers is available at www.

The 19th Annual Silicon Valley Jewish Film Festival opens with this special event and continues in four other venues Camera 12 in San Jose, Camera 7 in Campbell and in Palo Alto, the Oshman Family JCC and Cubberley Theater on Middlefield Road. The festival runs through November 13 with a full slate of feature films, documentaries and special events.

The festival kicks-off with a “larger than life” event featuring a sumo demo with several top sumos including 3X World Sumo Champion Byamba (good luck defeating him!) followed by a screening of Israeli Academy Award winning film “A Matter of Size.” It all happens on Oct. 9th at De Anza College beginning at 7 p.m.

Mission: to reach out to the Silicon Valley community and share films and special events that showcase Jewish spirit, culture and traditions from around the world.