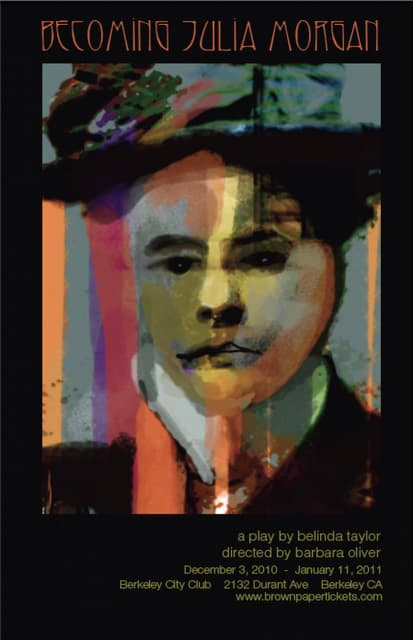 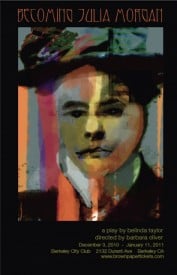 Architect Julia Morgan, widely admired in the Bay Area, remains surprisingly little known elsewhere. And those who do know of her are curious about her private side. She never married and had no known romances. She remains elusive, even to her most ardent admirers. Berkeley playwright Belinda Taylor addresses this conundrum in Becoming Julia Morgan, exploring Morgan’s determination to stay out of the limelight – “I’m not one of those talking architects!” – and the equal determination of one young San Francisco Examiner reporter to persuade her to give up her secrets.

Becoming Julia Morgan will have its Bay Area premiere at the Morgan-designed Berkeley City Club, 2315 Durant Avenue in Berkeley, December 3, 2010 through January 9, 2011. Noted Berkeley actor and director Barbara Oliver directs the ensemble cast, with Janis Stevens* reprising her award-winning role as Julia Morgan, which earned her a best actress “Elly” from the Sacramento Area Regional Theatre Association (SARTA) when the play had its debut in 2006 at California Stage. The production also garnered playwright Taylor a SARTA award for best new script.

Becoming Julia Morgan follows the life of this Bay Area icon over a six-year period, 1931 to 1937, as she works on San Simeon, runs a busy San Francisco office with a large staff, and surmounts a medical crisis and her fear that she may have been too successful at keeping a low profile. There are flashbacks to her student days at UC Berkeley and in Paris, and a flash forward to today. Woven with wit, fast-paced and moving, Becoming Julia Morgan played to sold-out houses and won rave reviews in its Sacramento premiere.

Julia Morgan was born in 1872 (just seven years after the end of the Civil War), growing up in a large family in the burgeoning city of Oakland during the final decades of the Victorian era. A tiny woman with a big ambition–to become an architect when there were virtually no female role models to show the way– Morgan overcame the social barriers of her day to become California’s first licensed woman architect. But first she had to battle her way into a centuries-old exclusive male bastion, the world famous School of Architecture at L’Ecole des Beaux-Arts in Paris. She used her design talent, her ability to listen to and integrate her clients’ needs, and her extraordinary engineering skill to design and construct more than 700 buildings in her lifetime, including the magnificent Hearst Castle, now a national historic landmark.

In researching the play, Taylor discovered Julia Morgan does not give up her secrets easily. She was devoutly private. Taylor, herself a journalist for many years at the Oakland Tribune, identified with the fictional reporter in her play: “Jerry’s efforts to get at the essential Julia Morgan – he wanted to write a book, I wanted to write a play – were constantly frustrated. But a gnawing fear that she had been too successful at staying out of the limelight motivates her to open up to Jerry, and in the writing of these scenes, I felt her opening up to me.”

Becoming Julia Morgan illuminates a tenacious will to succeed in a man’s world. It shines a light on Morgan’s bravery, fears, eccentricities, generosity and dedication to craftsmanship. Her success and the grace with which she lived her life serve to inspire us today, especially women and girls. The proof of her “confounding ability to conjure up beauty” is that we yearn to experience her buildings, be inside them, absorb the exciting visual elements and the harmony that are hallmarks of her artistry. Adds Taylor, “And we are eternally curious about this Sphinx-like genius.”