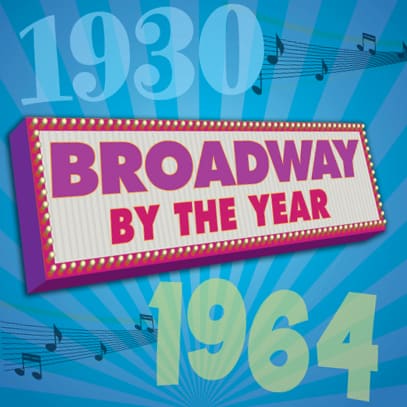 Broadway by the Bay (BBBay), a musical theatre company, will end its 45th Anniversary season with the West Coast premiere of Broadway by the Year – a musical and historical snapshot of the Great White Way – running for six performances only from November 18 through 21, 2010 at the San Mateo Performing Arts Center. Tickets for Broadway by the Year range in price from $20 – $48.

Broadway by the Year takes audiences of all ages on a musical tour of the Great White Way, offering an entertaining verbal account of Broadway’s history. Created by Scott Siegel for the historic Town Hall in New York City, the show celebrates the show-stopping songs (and some of the lesser-known gems) from Broadway shows of a selected year. The production will feature the years of 1930 (Girl Crazy, Strike Up the Band ,The New Yorkers) and 1964 (Funny Girl, Hello Dolly, Fiddler on the Roof).

“After playing in New York City for over 10 years, we are thrilled that Broadway By the Year will make its West Coast premiere at Broadway By the Bay,” said Artistic Director, Brooke Knight. “It is sure to be an evening of exceptional music featuring some of the top talent from the Great White Way.”

BROADWAY BY THE YEAR