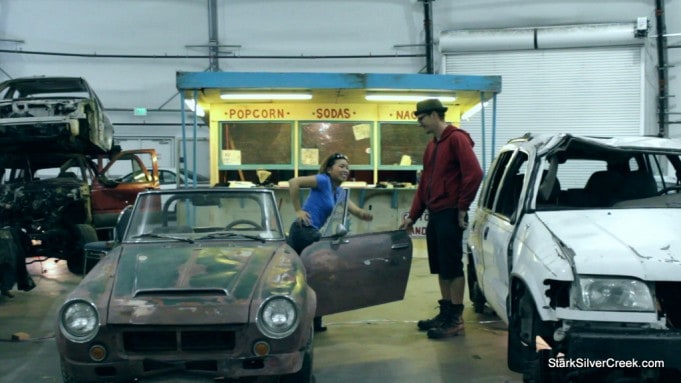 A projector, giant screen and 24 wrecked cars are a good start. But, any moment now, expect zombies. Either that, or a Mad Max-like dervish or two. Do not adjust your set, this is not a post-apocalyptic wasteland (despite a post-production color correction experiment). What you see here is the brand spanking new Empire Drive-In now open downtown San Jose. 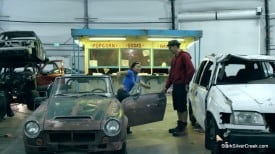 But why would anyone in their right mind think of building a drive-in when the rest of the world is going 3-D with plushy seats and giant-size sodas?

The answer, of course, is as interesting as the two gentleman behind the project.

Todd Chandler and Jeff Stark of New York are in town to prove that how you watch a film is just as important as the film itself–sometimes, in fact, the two even go hand-in-hand. Like Chandler’s first feature, a documentary called Flood Tide which officially opened at the drive-in last night. Plus, things in this world get old. We’re increasingly surrounded by junk!

Tossing a Frisbee with friends on a gravel lot, or running to the concessions for a classic hot dog aren’t the only bits of nostalgia you’ll counter at the Empire. Pricing too has been wound back–way back–to pre-disco levels. For only $5 you can experience the big screen, and the big, sometimes even live, sound.

If all of this is hard to follow, then may we suggest you watch this segment with the Stark-man himself… that other Stark from the East coast with the David Lynch approved glasses.

We present to you: Stark and Stark at Empire Drive-In. Will the Zombies come out to play … ?

Hopefully we’re improving here, with these videos. Those that follow SSC know that I like to occasionally add a note or two about the “production.” Again, the 01SJ Biennial is a visually beautiful place to shoot. In this video, for the drive-in, it felt like we were on a large studio set, possibly for a Tarantino film, or a David Lynch shoot for Mulholland Drive. I half-expected Cowboy to walk to us from the distance. We are shooting 24 frames per second on the awesome Canon T2i. This time, we experimented with color correction because it seemed so appropriate to have an old school, slightly green wash look to the piece. I’m not sure I achieved that exactly, but you can notice a subtle shift in tint as Loni enters the theater (Loni tells me she hates her skin tone with this effect). Work in progress! For soundtrack, this is one where I wish I could use something out of an Argento film; a Suspiria-like rumble with cackles and drum-rolls.

Smooth pans are a challenge since the tripod I’m using is an oldy, without a fluid head. And since I like to travel light for the run ‘n gun stuff, a steadicam is probably out of the question for now. My thanks to Jeff Stark who endured a second take of the latter part of the interview after Loni realized she had inadvertently switched off her wireless mic. Where’s my boom operator!? A major weakness in the T2i is the lack of audio monitoring. For now though I’ll just blame Loni. Ultimately, however, the best solution for audio is an external device and sync. More on that for another day. Meantime it’s time for the 2010 01SJ Biennial!