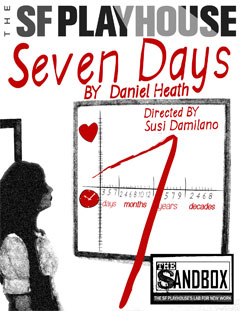 Originally commissioned and developed by PlayGround (Jim Kleinman, Artistic Director), Seven Days is about the love stories we tell each other and tell ourselves, and how a week can change everything. Three relationships spanning three generations play out over a single week as love is lost, found, and diagrammed on the wall.

The mission of The Sandbox Series is to promote new works utilizing top-notch directors and actors. The presentations will have limited design elements and will be promoted primarily using online services, thus reducing the costs and risk of each production. By reducing risk, we hope to bridge the gap between “readings” and “main stage” productions and thus provide increased exposure to the new voices in American Theater.

Daniel Heath is a San Francisco playwright. His award-winning short plays have been performed in San Francisco, New York, and across the country. He has received two full-length commissions from PlayGround (for Fifty Years Hungry in 2009 and Seven Days in 2010). His full-length comedies have been performed by Pianofight Productions in San Francisco and Los Angeles. His new rock musical, The Man of Rock, will be produced by the Climate Theatre in December of 2010.

Jon Tracy is the Director of Artistic Development at The SF Playhouse where he directed Aaron Loeb’s award winning First Person Shooter, Man of La Mancha, Bug, and the upcoming Slasher. He has also worked with such companies as Darkroom Productions (Founder/Former Artistic Director; directed and developed Some Devil Whisper (his adaptation of Titus Andronicus) and The Good News), Shotgun Players (The Farm, The Salt Plays), Impact Theatre (writer/director of See How We Are), Aurora Theatre (developed Ron Campbell’s Sinker), Marin Theatre Company (developed A. Zell Williams’ Blood/Money), and Missouri St. Theatre (writer/director of Chatterbox: The Anne Frank Project). Jon is an Affiliate Artist with The Foothill Theatre Company, Marin Shakespeare Festival, Berkeley Playhouse and Alter Theatre Ensemble, and a Company Member of PlayGround. A graduate of Solano College Theatre’s Actor Training Program, he is the recipient of the Kennedy Center Meritorious Achievement Award, fifteen North Bay Arty Awards, a Sacramento Elly Award, Bay Area Critics Circle Award and grants from Theatre Bay Area and the National Endowment for the Arts.

Founded by Bill English and Susi Damilano in 2003, The SF Playhouse is San Francisco’s fastest growing and most awarded Theater Company and hailed as a “small delicacy” by SF Weekly, “eclectic” by the San Francisco Bay Guardian, and “local theater’s best kept secret” by San Francisco Magazine. Located in Union Square, The SF Playhouse offers intimate, professional theatre with top notch actors and world class design. It has received multiple awards for overall productions, acting and design including the SF Weekly Best Theatre Award, Bay Guardian’s Best Off-Broadway Theatre Award. The San Francisco Chronicle raved, “One of the most meteoric rises [of the decade] has been that of SF Playhouse, Bill English and Susi Damilano’s 7-year-old-start-up that has been attracting more top-notch actors, directors, and scripts every year.” The SF Playhouse has become the intimate theatre alternative to the traditional Union Square theatre fare, providing a creative home and inspiring environment where actors, directors, writers, designers, and theatre lovers converge to create works that celebrate the human spirit.

WHAT: The World Premiere by local playwright, Daniel Heath, Seven Days is about the love stories we tell each other and tell ourselves, and how a week can change everything. Three relationships spanning three generations play out over a single week as love is lost, found, and diagrammed on the wall.

SHOWTIMES: Wednesday through Saturday at 8 p.m.