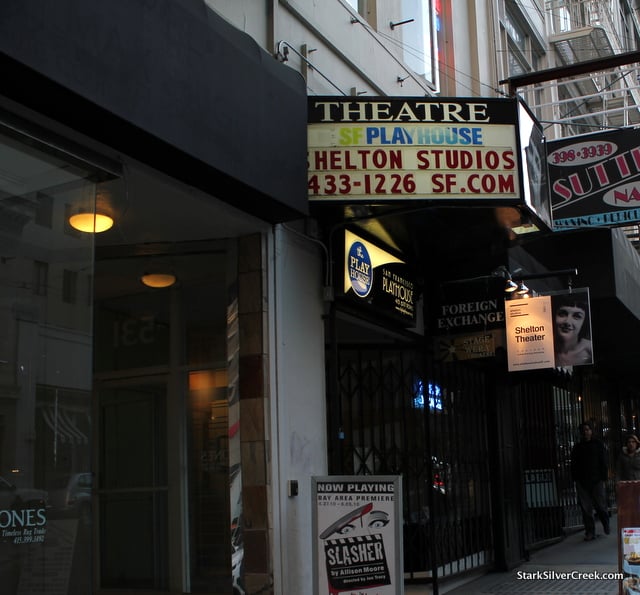 “The theme of the 2010-2011 season is ‘Why Theatre?”, remarked English. “Why do we do theatre? How does theatre serve our community?” Each of our selections for our eighth season will give a different answer to these questions. Based on the belief that mankind created theatre to serve a spiritual need in our community, our riskiest and most challenging season yet will ask us to face mankind’s deepest mysteries.

Opening the season is a play by one of the most powerful writers of our time, Cormac McCarthy (All the Pretty Horses, The Road, No Country for Old Men). The play, billed as “a novel in play form” brings us into a startling encounter on a New York subway platform which leads two strangers to a run-down tenement where they engage in a brilliant verbal duel on a subject no less compelling than the meaning of life.

TV and film star Carl Lumbly (Jesus Hopped the ‘A’ Train, Alias, Cagney & Lacey) returns to the SF Playhouse to reunite with local favorite Charles Dean (White Christmas, Awake and Sing!) after having performed together in Berkeley Rep’s 1997 production of Macbeth. Bill English, Artistic Director of the SF Playhouse, will direct and design the set.

Cormac McCarthy’s first novel, The Orchard Keeper (1965), won a Faulkner Award, and subsequent grants and fellowships allowed him to continue writing novels while he lived in Tennessee and Texas. Although his novels Outer Dark (1968), Child of God (1973) and Suttree (1979) solidified his literary reputation, he was relatively unknown until 1985’s Blood Meridian, a violent epic about the American west. During the ’90s McCarthy, hailed as a prose stylist in the tradition of Hemingway and Faulkner, became famous for his literary westerns called The Border Trilogy: All the Pretty Horses (1992), The Crossing(1994) and Cities on the Plain (1998). His other novels include No Country for Old Men (2005) and The Road (2006), both of which have been made into successful films.

Founded by Bill English and Susi Damilano in 2003, The SF Playhouse is San Francisco’s fastest growing and most awarded Theater Company and hailed as a “small delicacy” by SF Weekly, “eclectic” by the San Francisco Bay Guardian, and “local theater’s best kept secret” by San Francisco Magazine. Located in Union Square, The SF Playhouse offers intimate, professional theatre with top notch actors and world class design. It has received multiple awards for overall productions, acting and design including the SF Weekly Best Theatre Award, Bay Guardian’s Best Off-Broadway Theatre Award. The San Francisco Chronicle raved, “One of the most meteoric rises [of the decade] has been that of SF Playhouse, Bill English and Susi Damilano’s 7-year-old-start-up that has been attracting more top-notch actors, directors, and scripts every year.” The SF Playhouse has become the intimate theatre alternative to the traditional Union Square theatre fare, providing a creative home and inspiring environment where actors, directors, writers, designers, and theatre lovers converge to create works that celebrate the human spirit.

West Coast Premiere of
THE SUNSET LIMITED
By Cormac McCarthy