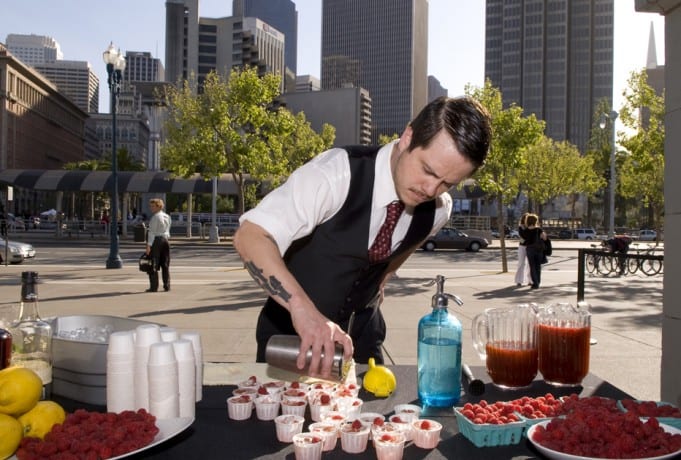 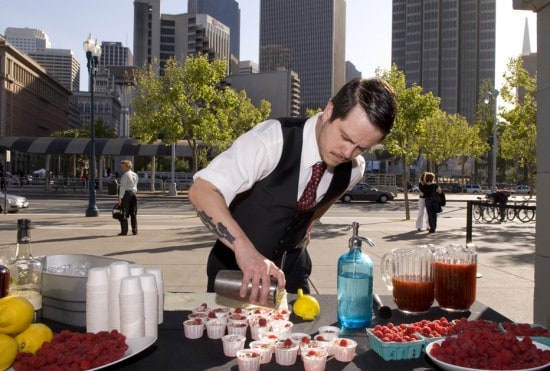 The unveiling of a new Center for the Beverage Arts, a Ragtag Rabble Gaming Soiree, Cocktail Carnival Gala and Karaoke Gong Show are just a handful of the events, happy hours and after parties presented by the Barbary Coast Conservancy of the American Cocktail in the Fourth Annual San Francisco Cocktail Week, September 21 to 27, 2010. Tickets and additional information are available at sfcocktailweek.

The official cocktail of San Francisco Cocktail week is the “Papa Ghirardelli,” named after the founder of Ghirardelli Chocolate Company, and features Campari, Encanto Pisco, Martini and Rossi Rossato Vermouth and Benedictine, shaken with lemon juice and topped off with seltzer water (complete recipe and history below).

A not-for-profit organization co-founded by cocktail entrepreneurs H. Joseph Ehrmann (Elixir), Jeff Hollinger (Comstock Saloon) and Duggan McDonnell (Cantina), the Barbary Coast Conservancy of the American Cocktail (BCCAC) is dedicated to preserving the cultural heritage of saloons and their cocktails in San Francisco while also celebrating California’s culinary philosophy and traditions with special events, publications and educational seminars. The official kick-off of Cocktail Week 2010 is the inauguration of the Boothby Center for the Beverage Arts, built by the BCCAC as a new home base for both the organization and beverage culture in San Francisco. 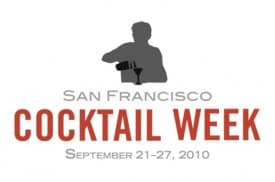 “San Francisco Cocktail Week would not be possible without the enthusiasm, dedication and support of a massive team of our industry colleagues volunteering their time, talent and venues, not to mention a bevy of sponsors. Between us we’ve created something unique to San Francisco, and the biggest series of events since we launched the world’s first cocktail week four years ago,” said McDonnell. “We look forward to continuing the momentum into the new Boothby Center, which will host special events, classes and forums throughout the year.”

Festivities kick off on Tuesday evening, Sept. 21, with the formal dedication of the Boothby Center for the Beverage Arts, the new home of the Conservancy and future hub of beverage education in San Francisco. Events continue through Monday evening, Sept. 27, including the Farmer’s Market Happy Hour, Ragtag Rabble Gaming Soiree co-presented by Cocktail Lab, Epic Happy Hour, Cocktail Carnival Gala at San Francisco’s Old Mint co-presented by The Bon Vivants, Hangar One BBQ in Alameda, and Chartreuse Karaoke Gong Show finale. Additional events include after parties, guest bartenders and more.

Inauguration of the Boothby Center
6 to 8 p.m.
Celebrating the debut of the “Cocktail Bill” Boothby Center for the Beverage Arts: San Francisco’s new community center, “beverage lab,” conference room and event space. “Cocktail Bill” Boothby was a turn-of-the-century San Franciscan barman, author, philanthropist and civic leader who connected the fabric of the City with his wits, his grit and his cocktails. The Barbary Coast Conservancy of the American Cocktail dedicates their home base as an homage to this historic San Franciscan and all those alive today who honor his work. Veteran bartender John Burton will be on hand to celebrate the night and the 51st anniversary of his bartending career in Northern California. Additional highlights of the evening include tours of the just-finished space and cocktails by co-founders of the Barbary Coast Conservancy of the American Cocktail (BCCAC), H. Joseph Ehrmann (Elixir), Jeff Hollinger (Comstock Saloon), Duggan McDonnell (Cantina).
$25 per person (Ticket includes cocktails and hors d’oeuvres.)
Address: 1161 Mission Street, Suite 120, San Francisco

Hangar One Cocktail Cookout on the Island
2 p.m. to 6 p.m.
The East Bay’s best bartenders are teaming up with Fatted Calf for a meaty, boozy outdoor festival, pairing barbecue with ice-cold cocktails under the sun at the Hangar One distillery in Alameda. Ticket includes a round-trip ferryboat ride featuring Hangar One cocktails, designed and served by Master Mixologist Scott Beattie of HMS Cocktails, from San Francisco’s Ferry Building and shuttle transportation to the Hangar One Distillery.
$50 per person (Ticket includes barbeque, cocktails and round-trip transportation from SF Ferry Building.)
Address: St. George Spirits Distillery (AKA Hangar One), 2601 Monarch Street (on the former Naval Base), Alameda

Chartreuse Karaoke Gong Show
9 p.m. to 2 a.m.
The grand finale of Cocktail Week is the legendary Chartreuse Karaoke Gong Show, where bartenders and civilians alike take to the stage and belt out their best in front of a panel of celebrity judges. Whether you’re good enough to finish your tune or “gonged” off the stage depends on your performance, enthusiasm and stage presence. The show is hosted by Chartreuse, which somehow loosens the pipes of even the most timid singer. All Chartreuse cocktails are $6 for the night.
$10 per person (donation to the Barbary Coast Conservancy of the American Cocktail); no-host bar
Address: The Ambassador, 673 Geary St., San Francisco

Attendees must be 21 years of age to participate in all San Francisco Cocktail Week events. Tickets and ID will be checked at the door.

For tickets, additional information and updates, please visit https://liquor.com/sfcocktailweek/. Advance purchase is recommended. Many San Francisco Cocktail Week events sell out and there are often limited tickets available at the event.

Net proceeds from all San Francisco Cocktail Week events benefit the Barbary Coast Conservancy of the American Cocktail. Additional information about BCCAC may be found atwww.sfcocktailweek.com.

Combine Encanto Pisco, Campari, Rosato, Benedictine and lemon juice in an ice-filled shaker and shake for 10 to 15 seconds, or until chilled. Strain over fresh ice into a Collins glass, and top with seltzer. Garnish with a slice of orange.

The cocktail is named after the founder of Ghirardelli Chocolate Company, Domingo Ghirardelli, an Italian-born man who moved to Peru and ran a successful confections business and, following tales of gold mines and potential riches, ultimately ended up in San Francisco. He went on to found Ghirardely & Girard (later changed to the Ghirardelli Chocolate Company), which has been in continuous operation since 1852. In his own way, Ghirardelli helped build and shape San Francisco, and his company has become synonymous with the city. Ghirardelli Square, which his company built, has been an official City landmark since 1965.