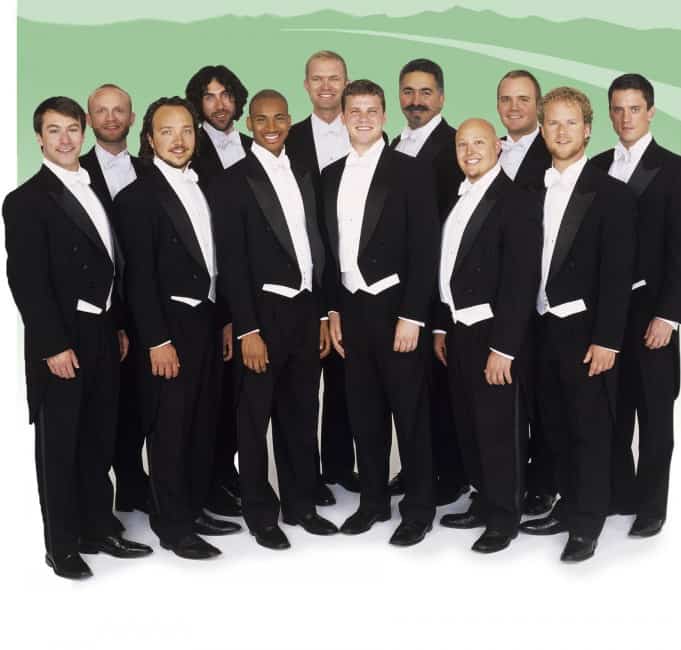 On the eve of Chanticleer’s 2010-11 concert season, the Grammy Award-winning ensemble is proud to release a number of new recordings beginning with “A Chanticleer Christmas” a new collection of holiday favorites from live performances in Stanford’s Memorial Church as a CD and for downloads. Studio-recorded singles accompanying the ensemble’s 2010-11 repertoire will begin regular release.

“We are also planning to release a live recording of highlights from Out of This World!, the concert that is going on the road this year,” stated Christine Bullin, Chanticleer’s General Director. “This is a huge departure for Chanticleer, since in the past our recordings have all been in-studio. But we would love to offer audiences a sampling of the concert they just attended, just as the rock people do!”

“Ever since Chanticleer recorded Franz Biebl’s “Ave Maria” in 1990, radio listeners have been reaching for the volume dial and asking for a little quiet as the ensemble opens up into those glorious dark-chocolate harmonies,” stated Brian Newhouse, executive producer for American Public Media. “This is the music and these are the voices that, for so many, simply mean Christmas. In 2007, American Public Media began sharing more of that magic by distributing to public radio stations the choir’s annual and always-sold-out Christmas concert. These are our favorite moments from those broadcasts.”

Chanticleer is also pleased to announce the new “CLIC | Chanticleer Live in Concert” download series. The ensemble is opening its vault of live concert recordings from the present and back through Chanticleer’s history, giving fans access to recorded performances.

Two other “Live in Concert” full concert downloads are planned for September. The first is the highly acclaimed performance The Singing Life, the grand finale of Chanticleer’s first ever National Youth Choral Festival, which took place at Davies Symphony Hall earlier this year in March. Chanticleer performed with 12 high school choruses from around the country, and the concert featured the American premiere of L’Annonciation, by French composer Jean-Yves Daniel-Lesur with renowned mezzo-soprano, Frederica von Stade. The second is “Comedian Harmonists: BETWEEN TWO WARS,” Chanticleer’s 2002 tribute to the internationally famous, all-male German close harmony ensemble that performed between 1928 and 1934 as one of the most successful musical groups in Europe before World War II.

Chanticleer’s many past recordings are available on Chanticleer’s website. Favorites include “Let it Snow,” a collection of Christmas music released in 2007, was on the Billboard charts for twelve weeks; “Best of Chanticleer,” a compilation with three new tracks including Mahler’s “Ich bin der welt” and Gershwin’s “Summertime;” and “Colors of Love” that won the GRAMMY® Award in 2000 for Best Small Ensemble Performance (with or without Conductor) and the Contemporary A Cappella Recording Award for Best Classical Album.

The world-premiere recording of Sir John Tavener’s Lamentations and Praises was released in January 2002 to critical acclaim and garnered two GRAMMY® awards for Classical Best Small Ensemble Performance (with or without Conductor) and for Best Classical Contemporary Composition. A track from this recording will be featured on The Tree of Life with Sean Penn and Brad Pitt to be released this fall. The DVD “Mission Road: Our Journey Back” has been extensively broadcast on public television. 2009 saw the release of the DVD “Fireside Christmas with Chanticleer” – a ‘burning log’ accompanied by favorite Chanticleer Christmas songs.

Called “the world’s reigning male chorus,” by the New Yorker magazine, and named “Ensemble of the Year” by Musical America in 2008, Chanticleer will perform more than 100 concerts in 2010-11, the GRAMMY Award-winning ensemble’s 33rd Season. Chanticleer will tour to Canada and 22 of the United States, including appearances at Walt Disney Concert Hall in Los Angeles, New York’s Metropolitan Museum of Art and the National American Choral Directors Association Conference in Chicago.

In early 2010, Chanticleer gave 14 concerts in 11 European countries, appearing at many of Europe’s legendary concert halls. In June, Chanticleer returned to Shanghai (after its May 2009 China debut tour) as part of the San Francisco delegation to Expo 2010.

Chanticleer is known around the world as “an orchestra of voices” for the seamless blend of its twelve male voices ranging from countertenor to bass. Founded in San Francisco in 1978, Chanticleer has developed a worldwide reputation for its impeccable musicianship, beauty of sound, and wide-ranging repertoire from Renaissance and Mexican Baroque to jazz, gospel, folk, and adventurous new music.