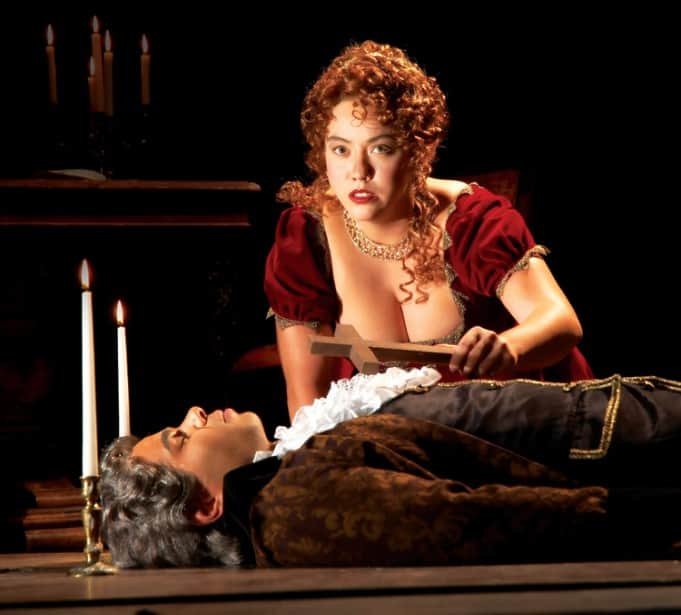 Opera San José continues its 27th Season with Giacomo Puccini’s powerfully dramatic opera, Tosca. The story of a popular opera diva brought down by the chief of Rome’s secret police, Tosca is known to leave audiences startled and breathless by the searing beauty of Puccini’s melodies.

Set in Rome in June 1800, Tosca is the story of an opera diva, Floria Tosca. She is beautiful, brilliant and spoiled and madly in love with a young painter and revolutionary, Mario Cavaradossi. When he is arrested for helping an escaped political prisoner, Tosca subjects herself to the sexual desires of the sadistic chief of the secret police, Baron Scarpia, in a desperate but unsuccessful attempt to save her lover from death. Murder and suicide are her final acts of defiance and bring the story to a stunning conclusion.

Tosca has become one of the most popular of all operas since its premiere in 1900 in Rome, Italy. Based on the dramatic play La Tosca written in 1887 by Victorien Sardou for the great actress, Sara Bernhardt, Tosca, at first glance, is an unlikely vehicle for Puccini. Murder, violence, and lust would seem to be unfamiliar themes for his typically tender, sentimental style expressed in his earlier successes, Manon Lescaut (1893) and La bohème (1896). But his genius triumphs in this political thriller full of arias that are as dramatic and compelling as they are lyrical and heart-breaking. This is an opera where no one escapes death and destiny, yet, for most, their downfall is so powerfully poignant that, indeed, “the stars fall down.”

Italian composer Giacomo Puccini (1858-1924) is distinguished as one of the most popular composers in opera history. After his early success with operas Manon Lescaut and La bohème, Puccini began work with librettists Luigi Illica and Giuseppe Giacosa to adapt Sardou’s play for the opera stage. The pair had already worked with Puccini on La bohème and would again for Madama Butterfly in 1904. Tosca was Puccini’s fifth opera and his first venture into verismo, a style of Italian opera noted for realistic depictions of daily life. Tosca was well-received by sold-out audiences when it debuted at the Teatro Costanzi in Rome and cemented Puccini’s status as one of the great Italian composers. According to Opera America, Tosca is in the top ten operas performed in the United States.

David Rohrbaugh, Opera San José’s founding Music Director and Principal Conductor, will conduct Tosca. Dr. Rohrbaugh has conducted more than 60 productions and 600 performances, including company premieres of La rondine, Der fliegende Holländer, Falstaff, Un ballo in maschera, and Werther. He is a professor emeritus of voice and opera from San José State University, where he taught for 30 years and co-directed the Opera Workshops with Opera San José General Director, Irene Dalis. The November 20 and 21 performances will be conducted by Anthony Quartuccio, a principal conductor and assistant conductor for numerous productions at Opera San José since 1999. Mr. Quartuccio is music director of the South Valley Symphony and assistant conductor of the San Jose Chamber Orchestra. His conducting and instrumental appearances include the Spokane Symphony, Cabrillo and Brevard Festival orchestras, the Santa Cruz Symphony, and the San Francisco Symphony.

Praised for her stage direction of Opera San José’s recent productions of La Cenerentola and Carmen, Sandra Bengochea (Rubalcava) returns to the company as stage director for Tosca. Bengochea is well known to Opera San José audiences as a principal artist with the resident company from 2000 to 2004, singing more than 30 soprano roles. Elsewhere, she has performed with Bayshore Lyric Opera, Israeli Vocal Arts Institute, Opera Idaho, The Lewis and Clark Society, Bangkok Opera, and Rimrock Opera.

Alternating in the role of the fiery opera diva, Tosca, are sopranos Rebecca Davis and Jouvanca Jean-Baptiste. Davis appeared as a guest artist with Opera San José last season in the roles of Countess Almaviva in The Marriage of Figaro and Magda in La rondine. She was a member of the resident company in 2008-2009 appearing as Tatyana in Eugene Onegin, Adina in The Elixir of Love, Fiordiligi in Così fan tutte, and Micaela in Carmen. She has performed with Chicago Opera Theater, DuPage Opera Theater, Sarasota Opera, Kentucky Opera, Opera North, American Opera Group, Intimate Opera, Wagon Wheel Theater, Music by the Lake, and Opera Theatre North. Most recently she was a participant in San Francisco Opera’s Merola Opera program. Haitian-American soprano, Jouvanca Jean-Baptiste is a first year member of Opera San José’s resident company and debuted in the title role to critical acclaim in the company’s West Coast premiere of David Carlson’s Anna Karenina. She made her mainstage debut with Florida Grand Opera in the role of The Abbess in Suor Angelica and was a semi-finalist in The Jensen Foundation Vocal Competition. Previously, she sang with West Bay Opera, understudying the role of Cio-cio-san in Madama Butterfly. Other roles in the soprano’s repertoire include Suor Angelica (Suor Angelica), Mother (Amahl and the Night Visitors) and Miss Rose (Lakmé).

Tenors Christopher Bengochea and Alexander Boyer share the role of the painter and Tosca’s lover, Mario Cavaradossi. They previously shared the role of Ruggero in Opera San José’s company premiere of La rondine last season. An Opera San José favorite, Christopher Bengochea returned to Opera San José earlier this season as Stiva Oblonsky in the West Coast premiere of Anna Karenina. He was a member of the Opera San José resident company from 2005 to 2008 and appeared in numerous roles including Rodolfo in La bohéme, the title role in Roméo et Juliette, and Pinkerton in Madama Butterfly. In addition to Opera San José, Christopher Bengochea has appeared with Opera Idaho, Atlanta Opera, and Opera Saskatoon, to name a few, and was a featured soloist with the San Juan Symphony and Modesto Symphony. Boyer is in his third year as a member of the resident company and appeared earlier this season as Levin in Anna Karenina. Previous seasons have featured Mr. Boyer as Des Grieux (Manon), Nemorino (The Elixir of Love), Ferrando (Così fan tutte), and Don José (Carmen). He appeared as Alfredo in La traviata for Sacramento Opera and has sung the roles of Arkady in Lee Hoiby’s A Month in the Country, Chevalier de la Force (Povlenc’s Dialogues des Carmelites), and Luigi (Puccini’s Il tabarro). Boyer also has participated in the Merola and Santa Fe Opera programs and is a winner of the Mario Lanza scholarship award.

Baritone Torlef Borsting and Bass Silas Elash alternate as the ruthless chief of the secret police, Baron Scarpia. Both are members of Opera San José’s resident company. Borsting made his company debut this season as the lover, Alexei Vronksy, in Anna Karenina. Recent performances for Mr. Borsting include Sharpless (Madama Butterfly) for Verismo Opera, Marcello (La bohème) for Pacific Repertory Opera, the Marquis (La traviata) for Sacramento Opera, and the 2nd Apprentice (Wozzeck) with Ensemble Parallele in San Francisco. He has also performed with Berkeley Opera, West Bay Opera, Trinity Lyric Opera, Capitol Opera, Martinez Opera, and San Francisco Opera. Elash appeared last season as Rambaldo in La rondine, Bartolo in The Marriage of Figaro, Don Magnifico in La Cenerentola, and Count des Grieux in Manon. Previously, he performed the roles of Zuniga in Carmen, Dr. Dulcamara in The Elixir of Love, and Prince Gremin in Eugene Onegin. Mr. Elash was a finalist in the Fourth Annual Irene Dalis Vocal Competition and was the recipient of the Wagner Society Award.

Sung in Italian with English Supertitles

Opera San José continues its 27th Anniversary Season with Puccini’s dramatic and compelling opera, Tosca. The story of a popular opera diva brought down by the chief of Rome’s secret police, Tosca always leaves its audiences startled and breathless by the searing beauty of Puccini’s melodies. Eight performances are scheduled from November 13 through 28 at the California Theatre, 345 South First Street in downtown San José. Tickets are on sale at the Opera San José Box Office, by phone at (408) 437-4450 or online at www. Tosca is made possible, in part, by a Cultural Affairs Grant from the City of San José.

Time: “m” indicates matinee at 3pm; all other performances are at 8pm

To learn more about Tosca, please visit www and consider these opportunities:

Introduction to Opera: Before each performance (except opening night), general manager, Larry Hancock, will present a free 45-minute talk about the opera at the California Theatre, beginning at 6:30pm prior to evening performances and at 1:30pm prior to Sunday matinees. No reservations required.

Opening Night Pre-Fix Dinner: A special pre-fix dinner for Opera San José patrons before the opening night performance on Saturday, November 13. The Grill on the Alley at the Fairmont Hotel located at 172 South Market Street, downtown San José. $40 per person for a three-course dinner. For menu and reservations, call The Grill on the Alley at 408-294-2244. The Grill will continue the pre-fix offering through the run of Tosca.

Meet the Artists: Meet members of the cast, the stage director, and the conductor immediately after the close of the opening Sunday matinee, November 14, at the California Theatre. Free for matinee attendees.

Amici Night: November 18. Members of Opera San José’s Amici Club (young professionals 35 and younger) are invited to the VIP Lounge at the California Theatre for wine and light hors d’ oeuvres at 7pm, prior to attending the 8pm performance.