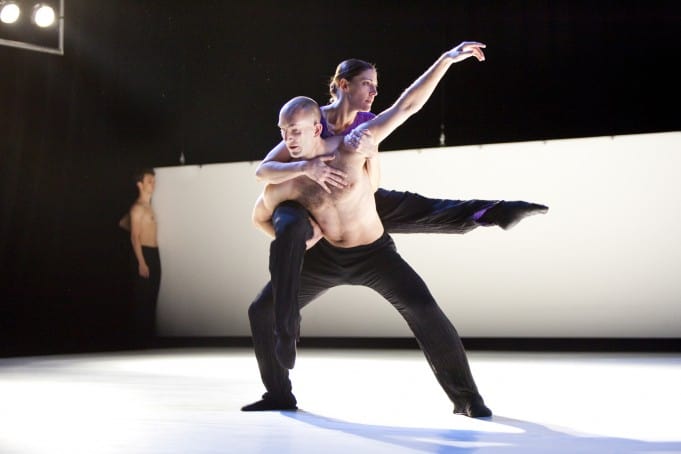 Hubbard Street Dance Chicago returns to Cal Performances on Friday and Saturday, October 29 and 30, with a quartet of dynamic new works. The 17-member troupe, led by artistic director Glenn Edgerton, will perform West Coast premieres of Nacho Duato’s Arcangelo, set to music by Arcangelo Corelli and Alessandro Scarlatti; Deep Down Dos, choreographed by Alejandro Cerrudo to music by UC Berkeley-trained Mason Bates; Blanco also choreographed by Cerrudo and set to music by Felix Mendelssohn and Charles Valentin Alkan; and 27’52”, choreographed by Jirí Kylián to music by Dirk Haubrich based on Gustav Mahler, will be performed for the first time in the Bay Area.

A Lobby Talk will be given on Saturday, October 30, at 5:00 p.m. by Hubbard Street artistic director Glenn Edgerton and Bay Area choreographer and teacher Kathryn Roszak. This event is free and open to the public and takes place on the Zellerbach Hall mezzanine.

Arcangelo (2000) was choreographed by Spain’s Nacho Duato to music from Arcangelo Corelli’s Concerti Grossi, Op. 6; the dance closes with an aria from Alessandro Scarlatti’s opera, Il Primo Omicidio. The ballet describes the search for liberation through death, and was choreographed by Duato when he was artistic director of the Compañía Nacional de Danza in Spain. (Duato, called “Europe’s most sought-after choreographer” by Cheeky Chicago, left that position in spring 2010, after 20 years on the job, to lead the Mikhailovsky Ballet in St. Petersburg, Russia.) The Guardian called the dark, brooding Arcangelo “a series of anguished encounters emotional macramé, tying the dancers in knots.” Hubbard Street Dance Chicago is the only United States dance company ever to perform this work, and its dancers worked directly with choreographer Duato in the rehearsal process.

The “breathless new ballet” (Chicago Tribune) Deep Down Dos (2010) by Hubbard Street Dance’s resident choreographer, Alejandro Cerrudo, invokes dark, mysterious subterranean settings. Set to Music from Underground Spaces by Mason Bates, composer-in-residence with the Chicago Symphony and a product of the UC Berkeley music department and Bay Area club music scene, Deep Down Dos is “primarily based on the dancers’ feeling the progression, changes and intricacies of the music,” Cerrudo wrote in Hubbard Street dancer blog. “I think that the dancers’ ability to use their bodies to represent the sentiment of the music will certainly help dance audiences to develop a greater connection to this music.”

It will be followed by a companion piece, also choreographed by Cerrudo, titled Blanco (2010). Using the first prelude from Felix Mendelssohn’s Six Preludes and Fugues, Op. 35, and the eighth prelude from Charles Valentin Alkan’s 25 Preludes dans touts les tons majeur et mineurs, Op. 31, Blanco is a mix of abstract and sculptural movements created for four of Hubbard Street’s female dancers. Recalling its creation, one of the dancers, Meredity Dincollo, said, “One day we worked on very minimal movements for an hour, and with each movement Alejandro requested that it be smaller, and smaller, and smaller. This piece is unlike any other work in our repertoire.”

The final dance on Hubbard Street’s Berkeley program, 27’52” (2002), by the Czech choreographer Jirí Kylián and set to music by Dirk Haubrich based on Gustav Mahler, is a look at the “dark combat and fragile, feral beauty of human entanglements” (Chicago Tribune). Kylián created the piece—named for the length of time it runs—for the Nederlands Dans Theater at a time when Hubbard Street’s Glenn Edgerton was that company’s artistic director.

Hubbard Street Dance Chicago was founded in 1977 by dancer and choreographer Lou Conte as part of his Lou Conte Dance Studio. From its humble beginnings as a jazz dance ensemble, the company has risen to international prominence and attracted internationally known choreographers—including Nacho Duato, Daniel Ezralow, Ji?í Kylián, Margo Sappington, Lynne Taylor-Corbett, and Twyla Tharp—to create pieces for its repertoire. It is one of the few American dance companies to operate year-round, and has spawned a junior troupe, Hubbard Street 2, as well as retaining the original Lou Conte Dance Studio and creating a variety of education and community programs for people in the Chicago area. Today, Hubbard Street Dance Chicago is “a company that’s undergoing off-the-charts artistic growth” (Oregonian, Portland).

Conte served as the company’s artistic director until 2000. He was succeeded by Jim Vincent, who continued the troupe’s tradition of excellence and expanded its participation in the greater Chicago arts community. Vincent created two enduring programs at Hubbard Street: the Inside/Out Choreography Workshop, during which company dancers create original choreography with their peers, and the Choreographic Fellowship, which identifies and develops emerging choreographic talent within the company. Dancers Alejandro Cerrudo, Brian Enos, and Terence Marling and associate artistic director Lucas Crandall have developed works for the company through these programs. Cerrudo, whose Deep Down Dos appears in Hubbard Street’s Berkeley performance, is currently the company’s first resident choreographer.

Glenn Edgerton became artistic director of Hubbard Street Dance Chicago in 2009, bringing a passion for new choreographic works and a deep desire for enhanced collaboration and communication with an international roster of musicians, choreographers, dancers, and artists. “Our eclecticism, our cultivation of new choreography is what makes Hubbard Street unique,” Edgerton recently told the Los Angeles Times. “We are poised to demonstrate what dance can be and where dance can go. We don’t even know where it is. Wherever it is, I want to be the catalyst.”

TICKET INFORMATION
Tickets for Hubbard Street Dance Chicago on Friday and Saturday, October 29 and 30 at Zellerbach Hall are priced at $32/$42/$50/$60/$68. Tickets are available through the Cal Performances Ticket Office at Zellerbach Hall; at (510) 642-9988 to charge by phone; at calperformances; and at the door. Half-price tickets are available for purchase by UC Berkeley students. UC faculty and staff, senior citizens, other students and UC Alumni Association members receive a $5.00 discount (Special Events excluded). For more information, call Cal Performances at (510) 642-9988, or visit the Cal Performances web site at calperformances.

For select performances, Cal Performances offers UCB student, faculty and staff, senior and community rush tickets. Rush tickets are announced two hours prior to a performance and are available in person only at the Ticket Office beginning one hour before the performance; quantities may be limited. Rush ticket sales are limited to one ticket per person; all sales are cash only. Rush ticket prices are $10.00 for UCB students; $15.00 for UCB faculty and staff (UCB ID required) and seniors age 65 or older; and $20.00 for all other community members. Information is available at 510-642-9988, press 2 for the rush hotline, two hours prior to a performance only.