This is a meditation on hair prompted by a radical decision which finally seemed the most natural thing to do.

But first…I’ve been told that I had little to no hair during my first year. This prompted the very unfortunate scotch-taping of bows to my head…which continued into toddlerhood.

I don’t know anyone who is always comfortable and at peace with their hair.  Jasmine, the woman who has been in charge of my hair for many years now, says we all belong to one of two groups…those who see their hair as an accessory and those who consider their hair an appendage.

If your hair is just one of the accessories that adorn your body then you have a bit of distance from it. You like how it looks one day, not like it the next, but it doesn’t really affect the rest of your day. If your hair is another appendage then it is much more a part of what defines you as a person, determines your self worth, can make or break your day.

I’ve been a bit of both. My mood could very easily be affected by how I felt about my hair. Luckily, I rarely looked in mirrors so I would soon forget my awkward “do” of the day and get on with enjoying my life. The shape of my “hair-do’s” often rested in the hands of others. From braids to flips to a “bubble” in high school. I once tried ironing my hair….don’t ask. I really enjoyed the “hippie” era. I could let my hair grow and do it’s own thing and look just like everyone else.

As the years went by a new dimension was added to my hair conversation….color, or the lack of, as white hair began to appear on my head. Finally I decided to color my hair and I’ve been ever since….until recently.

For a long time I worked at a TV station where the median age of the employees began creeping down and the amount of grey hair kept growing on my head. I didn’t want to be seen as the grandmother of the tech crews…so I “had” to keep coloring my hair. I colored it for so long that I actually didn’t know what my natural hair looked like.

Finally, a few months ago, Sharon said “why don’t you just not color it this time?” And I realized that I was ready to see what I really look like….and it turns out…not so bad. Now, I must say that passing a mirror still is a little unnerving. What does this mean that I am a white haired woman? Have I totally lost any cool points? Do I have anything to say that anyone cares about? Can I be a silly as ever? How much do I care about being defined by the color of my hair?

With all that is happening locally and globally, why even have this discussion at all? Well, I believe that before any action or stand that I take can have validity and effectiveness, I need to be connected to and coming from my “authentic self”.  I know overuse has almost rendered those words meaningless…but they’re not. When I act out of integrity with myself the consequences aren’t pretty. So I have placed “knowing authentic self” as a very high priority. And somehow letting the world see my real hair color is part of that process. I don’t recommend this for everyone..unless you feel totally ready for all the consequences, positive and negative. But I have to say most of the consequences have been positive. I just have to swallow the fact that people don’t assume I am much younger then I am anymore.

I really do love the part of history that I have had the opportunity to experience….the cultural, political and personal highs and lows that have made up my life until now. And now, one reason I love being part of StarkSilverCreek is that I get to witness that vortex of energy, intelligence, curiosity and adventure of a newer generation that Loni and Clint represent.  StarkSilverCreek propels me into the present/future in such a fun way.

So I am galloping into that present/future now as the even more authentic me and it feels great. 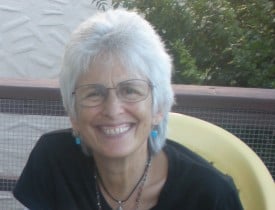 Oh and about Hair, the Broadway show? I actually auditioned for the Broadway production, even though I wasn’t an actress…I was a hippie who had always wanted to be in a Broadway musical. How did the audition go, you ask…that’s a whole other blog entry.