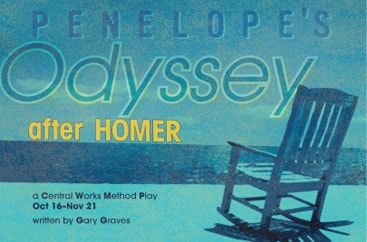 Odysseus has been missing for ten years, ever since the end of the war. His wife, Penelope, must choose a new husband. There are 50 suitors living in her house. What is she weaving up in her room, night after night? Who is the mysterious beggar that arrives at the house? And why does Penelope’s daughter believe she is the son of Odysseus? In a world of unpredictable gods and fantastic monsters, Penelope’s Odyssey weaves the tale of a woman left behind in the aftermath of a long war.

“Wise is the child these days that knows his own father, especially them that’s conceived in the dog days of summer, when their mothers are frantic with love.”

Continuing its mission to develop and produce new works for the theater, Central Works uses its own method of collaborative play development to bring artists together as partners in creative projects from conception through to fully developed productions.

Since 1997, the company has produced 26 world premieres using the Central Works Method. Penelope’s Odyssey will be number 27, and the second production of the New Play Program, 2010-2012. This three-year initiative to develop 9 world premiere plays utilizing the Central Works Method is supported by the Wilder Green Fund and the Kenneth Rainin Foundation

Penelope’s Odyssey – a new play based on Homer’s Odyssey