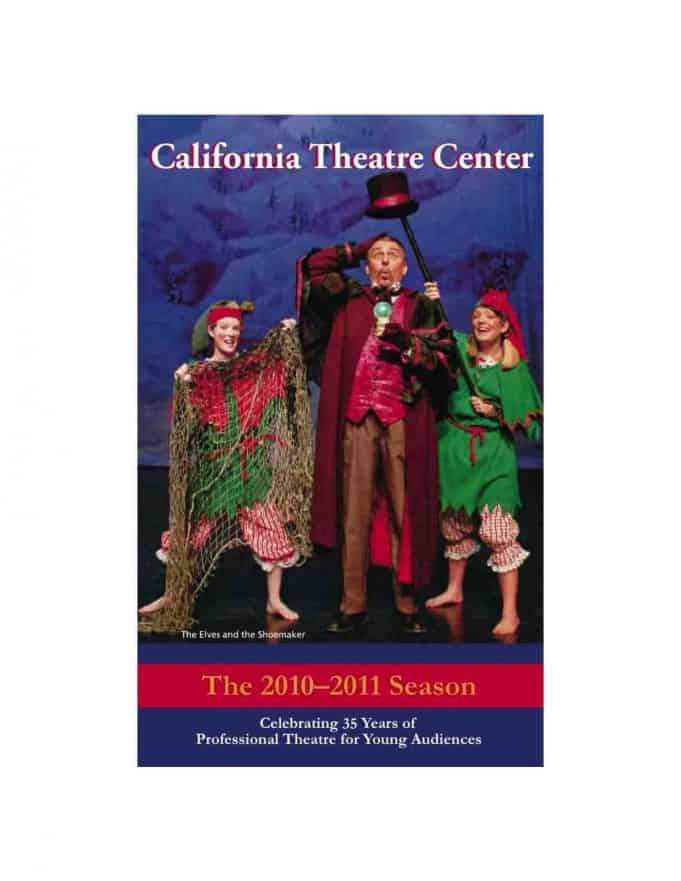 California Theatre Center also offers weekday morning performances at 9:30am & 11:00am of all these shows geared especially for School Groups; however, homeschoolers and the general public are welcome to attend.

POSTSHOW PLAYSHOPS!
On selected Saturdays (marked with an* below), patrons can stay after the show for an additional 45 minutes to join the cast for a talkback question and answer session and a demonstration or activity relating to the show! Adults accompanying paying PostShow PlayShop participants may observe at no extra charge. Just $5.00 per person in advance or $7.00 per person at the door in addition to the show tickets.

CELEBRATE A CHILD’S BIRTHDAY WITH CTC!
CTC Birthday Parties include: your personal CTC party liaison, tickets and VIP seating for the performance, acknowledgement of the birthday child in the curtain speech, autographed photo of the cast, backstage tour and either a question and answer session with the cast or theatre games on stage with a CTC professional. $24 per child. $11 per adult. Limited based on ticket availablilty. Minimum of 6 children including the birthday child. Total time including the performance is approximately 1 hour 45 minutes. Reserve now! Call 408 245-2978 for availability.

All evening performances include a free talkback session with the actors after the show!

Play Descriptions for the 2010-2011 Season (in alphabetical order)

The Adventures of Tom Sawyer
Go back in time to Missouri in 1845 in this entertaining adaptation of Mark Twain’s classic to witness the childhood adventures of Tom and his best friend Huckleberry Finn as Tom gives all the boys in the neighborhood the “privilege” of whitewashing a fence, as he leads Joe and Huck on a journey to Jackson Island to become pirates, and as he shows off at school for his new girlfriend Becky Thatcher.
For grades 2 and up.

Alexander and the Terrible, Horrible, No Good, Very Bad Day
Relate to the obstacles the disgruntled Alexander must face in this musical adaptation of Judith Viorst’s popular book! Alexander is having a bad day. A terrible day. A terrible, horrible day. But then, everybody has those kinds of days sometimes!
For grades K-5.

Amelia Earhart: Flights of Fancy
Be inspired by the bravery and sheer determination that lifted Amelia Earhart beyond society’s expectations and gave her the strength to achieve her dreams, soaring above the clouds as America’s most well-known female aviatrix.
For grades 4 and up.

The Elves & the Shoemaker
Laugh when two merry elves arrive at a small village in the Black Forest to discover a poor shoemaker who clearly need assistance. Their cleverness saves the shoemaker from a bleak and unhappy holiday in this CTC classic, adored by both children an adults all over the world.
For grades K-5.

The Frog Prince
Enjoy this popular tale by the Grimm Brothers about a vain and childish Princess who has promised to kiss a frog! At first she refuses to keep her promise, but in time realizes the importance of honesty and honor. Her kiss breaks the spell and transforms the frog back into a handsome Prince. An artful use of puppetry, dance and comedy makes this story “spring” to life and its audiences “jump” for joy!
For grades K-5.

Hansel and Gretel
Accompany two heroic children, in this classic Grimm Brothers’ tale,.who struggle for survival in an enchanted wood and who use their cleverness and bravery to prevail against a wicked old woman who lives in a cake and candy cottage.
For grades K-5.

I Don’t Want to Go to Bed
Observe the frustrations of a young girl who doesn’t like bedtime so transforms this task one night into a wonderful imaginative adventure with her parents by re-enacting her favorite stories including The Three Little Pigs and The Billy Goats Gruff.
For grades K-4

King of the Golden River
Follow the dangerous trek of a young boy as he seeks to transform his homeland, Treasure Valley, from a barren land of red sand to its once beautiful state. When, because of his courage and kindness of heart, he meets the magical, dwarfish King of the Golden River, he learns a secret that will restore the balance of nature and make the valley lush and fertile once again.
For grades 2 and up.

Madeline’s Christmas
Meet the ever-spunky, resourceful Madeline in a musical play adapted from one of Ludwig Bemelman’s captivating books. It’s the night before Christmas and everyone is sick in bed with the flu except brave Madeline, who feels just fine and must take care of the eleven other little girls and Miss Clavel “in the old house in Paris all covered with vines.”
For grades K-5.

Miss Nelson is Missing!
Be charmed by this lively musical comedy about a clever teacher who masquerades as the infamous Viola Swamp, a nasty substitute, in order to teach her class just what a good and fair teacher she is! A smash hit back by popular demand!
For grades K-5.

Most Valuable Player
Witness the internationally acclaimed drama about the life of Jackie Robinson. Through a series of moving flashbacks which chronicle his life, the play celebrates an extraordinary man who fights a tough battle against prejudice to become the first black Major League baseball player.
For grades 4 and up.

Puss in Boots
Be amused by this famous fairy tale about the adventures of a very clever, enterprising cat and his poor master as they journey across the french countryside in search of a better life. With the help of Puss, the young man meets and King and his lovely daughter and later outwits an awful ogre to win the hand of this beautiful maiden.
For grades K-5

The Ugly Duckling
Be uplifted by the thoughtful Hans Christian Andersen story in which an ugly duckling discovers that he is a handsome swan. This heartwarming musical production about the passage from the awkwardness of adolescence to the grace of maturity has been acclaimed by sold-out audiences throughout the USA and as far away as Japan and Russia!
For grades K-5